I love shifter books. The raw, primal feeling these guys and gals have amid the pages really has me glued to the book, flipping the pages so fast it looks like I am a NASCAR race. My favorite shifter book has to be by Deborah Cooke. Her Dragonfire novels are one spellbinding story from start to finish. When I sit down with one of her books, I am blown away by the way she created this world and populated with shape-shifting dragons.

Now who doesn’t like a good dragon story? I love them. In my Devon Falls book, Fiery Magic, I got the idea to make one of the characters a dragon and the heroine called him “pretty”. Now tell me, are dragons “Pretty”? To me they are wild, primal and pure fun as in the case of Smokey from Yasmine Galenorn’s Otherworld series. Each author makes the shifter, be it dragon, wolves, tigers or, heck, even ferrets, their own and they each incorporate something that will have the reader clamoring for more.

In Fiery Magic (Devon Falls 3) & Haunting Magic (Devon Falls 4), we met the Dracon twins; one is a dragon shifter, the other a wolf shifter; one family-many generations- who are shifters of some kind. I made my shifters a bit different, where each person in this large family, is something different. They didn’t get bitten by the animal; case in point a werewolf, but were born as a shifter of some kind. It is the magic in their blood that defines what they become. Eventually we will meet a cousin of Rod and Damien Dracon- a woman who, in this large family of shifters, has no shifter powers what so ever. What do you do if you have no powers but what god/goddess gave you? That is the question I will ask her and her hero………eventually. ;^)

My next Devon Falls book introduces a new character in Michael Barnes, who is a rare white tiger shifter who is all alone with no pride. He roams from place to place and is friends with Damien Dracon, who tries to get him to Devon Falls to no avail in years before. He was an interesting character to write about. Here you have a lonely, quiet man who has no place to call “Home”. He longs for mate, hearth and kits of his own but knows that with no pride; he is limited in his choices…….or so he thinks. We meet the woman who will knock him flat on his back and show him that home is where the heart is in Moonlight & Magic, out December 21st with Secret Cravings Publishing.

Shifters are a world where readers and authors can explore with pure enjoyment. I love reading them and hope to eventually expand on shifters as an author to include Kitsunes and others that fire the imagination. In the meantime, I am going to sit with my dragons and explore their world because Ms. Cooke and Ms.Galenorn are calling me from the bookcases. So what are your favorite shifters to enjoy? Any author you love that write about shifters?

CONTEST: One winner will win one of my five books-PDF only. All you need to do is comment on my post today and be entered to win. Make sure you leave your email address so I can contact you if you win.

BIO: Raine Delight loves to be pampered by her harem of men that exist solely for her pleasure. Wait…..that was in a movie she saw. Hey, she can dream. Raine loves to fight with her muse, attack her manuscripts and find a way to silence the many voices in her head. Inspiration hits at odd times and for Raine, a blank word document page gives her many possibilities on story ideas. Living with her two kids, a significant other who supports her every move in writing and doesn’t seem to mind she gets up at 2 am to type away on the computer. With a love for Johnny Depp, movies and 80’s hair bands, Raine finds a way to bring all her chaotic thoughts into a story that tells her readers about love and romance.

Email me: rainedelight [at] yahoo.com 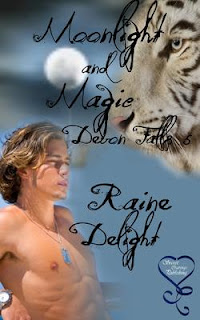 Can a tiger shifter convince one stubborn woman that she is his for all time and show her that falling in love is just as sinful as a chocolate kiss?

Michael Barnes is a rare white were-tiger and is tired of roaming around the world alone. Meeting his destined mate was unexpected as well. Dixie Sinclair is fun, sexy, and everything he feels he doesn’t deserve. The past has a way of coloring a person’s life and it’s up to Michael to show Dixie that he is the one to hold her heart.

Scene set up: Dixie is miffed her friends got Michael to walk her home and is confused by her reaction to him. Here is where he kisses her for the first time…

As her street loomed ahead of them, she stopped at the beginning of it and stuck her hand out. “Thanks for the escort, but since I’m almost home and nothing jumped out in front of me, I think I can handle getting to my house just fine.”

“Nope. I am to escort you to the house, not the street, Dixie,” the maddening man said as he looked at her with a smile on those luscious lips. Gritting her teeth, she tried to keep her frustration out of her face, but damn it all, she was old enough to walk home. It wasn’t like there was a crime wave in Devon Falls. Far from it.

Miffed, she stomped forward and tried not to hit the lug behind her. Of all the men in the world, I had to have one with a streak of chivalry in him she thought as her house finally came in view.

Breathing a sigh of relief, she turned and ran smack dab into the broad, hard chest…the chest her hands wanted to caress and explore among other parts of his body. A slight “oomph” came out of mouth as she looked up and felt herself drown under his gaze. It was like watching a movie in slow motion. She saw his face lean down and her one thought before those luscious lips settled on hers was Man, am I in trouble now.

Michael leaned forward. When he finally touched those kissable lips, he felt the spark that hit him the first time he touched her turn into an inferno. Pulling her close, he felt her body mold itself around him, fitting against his, and it was pure perfection. He couldn’t get enough of her. Kissing her was like diving into fire. She was a drug he craved, and he was determined to have it.

Feeling her kiss him back had him aching in more ways than one. Sliding his tongue along her lips had her gasping. Taking advantage of that, he slipped it in and began to duel with hers. The deep kisses made him want more, but before he took her against the trees, he gathered his last shred of control. With a last, deep kiss, he took a calming breath and leaned his head against hers, his breath choppy and his jeans a tad bit too tight at the moment.

Ahh shifter are my current delight. I am reading many books about them. I enjoy seeing the different takes on shifter capabilities.
debby236 at gmail dot com

Enjoyed the excerpt. Would like to read the rest of the story. Thanks for the giveaway. :)
shellya121 at yahoo dot com

Welcome to Beyond Romance! Thanks for the excerpt and the giveaway. I LOVE the cover for Moonlight & Magic. How could a woman not fall in love with that guy?

Shifter stories are my guilty pleasure. I saw the blurb for Moonlight and Magic earlier today and really enjoyed it.
Jacki

shifter stories are my guilty pleasure also. I love all kinds and as long as the hero/herione are strong alpha, then I love the story. I agree with the Deborah Cooke assessment-I love her books too. I never did get into Yasmine's books-just had too many books to read I guess. Carolyn
j-coverholser at sbcglobal dot net

Hi Raine,
thank you for the chance at such a great giveaway. i love shifter books too. some of my favorite authors are Stacey Espino,Selena Blake, Amber Kallyn,yourself, Misty Martin,and Tianna Xander. this is just a few of them but there isn't enough room for all of the authors i like. :)
thank you again and enjoy the rest of your weekend. i hope you and your family have a very Happy Holiday Season.

That was a lovely excerpt. I love shifter stories and was intrigued that you are thinking about kitsune shifters since they are Japanese in origin. It would be great to see one included in your Devon Fall series.

Oh I love shifters! Next to werewolves they're my favorite paranormal creature! Thanks to my brother I'm intrigued by Japanese myths and culture so I'd be more then happy to find someone who'd write about a kitsune shifter!

Now let's see some of my favorite shifters? Well like you Ms. Delight I really like dragon shifters, especially the ones written by G.A. Aiken.

I read Dragon Actually one day and I just couldn't put it down, I've read three books in her Dragon Kin series so far and they were all great.

They're also Sherrilyn Kenyon's Were-Hunter stories and although they might be considered more part of the werewolf lore then the shifter lore I love them just as much as I love G.A. Aiken's Dragons.

I love how an author takes the different aspects of the shifter legends and molds them so the author can make shifters their very own.

Thanks for the awesome giveaway!

Wow Raine....great article! I don't think I have ever read a story about a shape shifter! Your book/books sound really good. congrats to you.

I love shifters & your Devon Falls series has been on my wish list for a while, unfortunately my book budget can't keep up with the number of books I add to the wish list, so it could be some time before I can afford them. It would be great to win a set.

Shifters are the bad boys who all the good girls love. They are such a joy to read about.
While I haven't read any of your writing (except for the (Moonlight & Magic, Devon Falls 5 excerpt you posted above), I really want to win a book so that I can enjoy your wonderful shifter novel.

I love shifter books too! I haven't read any of your stories, but I'm really looking forward to it with all of those great shifter books you've written! Thanks for the giveaway!

I love shift changer stories. They are just so neat. Your excerpt is just great and hope I get a chance to read it all.