Breaking the Romance Rules - With a Christmas Twist!

Just for the fun of it, I’m going to take three romance rules and find a Christmasy way to break them without slipping out of the genre. Readers, let me know if I succeed.

1. The hero and the heroine must meet very close to the beginning of the book and feel an instant attraction.

Sue climbed onto the bus and shook the snow from her flaxen hair, wrinkling her frozen nose as she plunked her change into the tariff box. The bus heaters blasted warm air from all sides, stirring the scent of melting muck and salt as she quickly made her way to her usual seat, right across from the middle door.

Someone had written a note right on the light blue vinyl padded seat.

‘Mark Twain, Cinnamon rolls, and cerulean. Things we have in common. Meet me if you’d like to see if there’s more. 57483’.

Meet . . . but who had left this? And when? Well, the ‘when’ was easy. Today. She would have noticed this on her seat yesterday.

And who . . . she finished work hours before the rush and the bus was usually pretty empty. A few faces had become familiar. Like the two old women getting on in front of the Salvation Army where they volunteered. A few students.

She snorted. Right, like he’d notice her. He only rode the bus once a week and he looked like he could either be a model or a god. After he’d almost caught her staring, she’d avoided so much as glancing his way when he sat in the back of the bus. He was way out of her league.

If this is from him, he obviously doesn’t agree.

Maybe, but it was Christmas Eve. She couldn’t very well ditch the office party to meet a stranger, even if the stranger knew her favourite author, coffee flavour, and color. Even if he’d written the address of her favourite cafe, which was actually along the way.

She watched the stop approach. Stood. Took a deep breath . . .

And then sat back down. Sue Booth didn’t do impulsive.

2. The woman’s POV is the priority. (This one kinda surprised me, but if you look up romance rules, you’ll find it all over the place—apparently women don’t really care what the man is thinking).

“Hohoho!” Brian reclined in the big Santa throne and rubbed his chin under the thick white fake beard. He couldn’t believe he’d volunteered to be the mall Santa. Forcing a smile, he picked up the pee-scented toddler and perched the kid on his knee. “So what do you want for Christmas, little man?”

The kid rambled on and on, and Brian did his best to pay attention, but his gaze wondered to his helper, so fucking cute in her elf outfit. She’d complained that it made her look fat. He had no idea why. Those green tights hugging all her curves looked just right.

Okay, maybe he did know why he’d volunteered. He couldn’t give up the chance to enjoy seeing her like this tonight. And he had a few ideas for what they could do in this chair when the kiddies went home.

This is my favourite one to break. According to the rules, the hero and the heroine should never, ever want anyone else ever again. Because that’s romantic *eye roll*

“This gift is kinda for both of us.” Her husband, Paul, gestured to the great big rectangular box obscuring the tree. “It’s something we’ve been talking about and I thought—“

“You didn’t.” Astrid stared at the box, covered with silver wrapping paper which had naughty naked angels all over it. She took another sip of spiked eggnog and then licked her bottom lip. Her pulse sped up. “Are you sure.”

Paul inched closer to her to whisper in her ear. “Open it, love.”

She tore the paper and tugged at the flaps of the box. They were taped a little too well.

“Damn it!” She laughed and glanced at Paul. “Bring me the scissors.”

The box burst open. Chris, one of their best friends, stumbled out, one hand over his very erect dick. “No scissors. I’ve got it.” 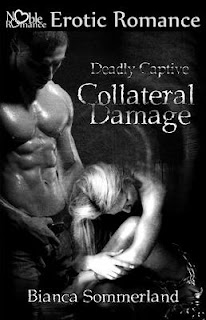 Stolen from a bright life full of colors, happiness and youth, Nicole Reed is dragged into a pit of pain and depravity where all she can hope for is a quick end. But her captors don't want to kill her. They want to use her to teach a little boy whom they plan to mold in their image.

She must free him before that happens. Only, she can't stand against those who hold him, not alone. Her only hope is Vince, one of her tormentors, who may still show a glimmer of humanity.

Or maybe that's just a trick of the light.

Small creases formed on his forehead and around his dark eyes. "Why are you 'fucked up'?"

Seriously? This guy was too much. "I don't know—captivity does that to me."

My brow shot up. "Have I? Well, I guess I'm being over sensitive. I kinda take basic liberties for granted. What can you do?"

He stood and set down his cup. "I don't appreciate sarcasm."

I took another sip and smiled. Guess he wasn't as infallible as he pretended to be. "Well, I don't appreciate being kidnapped and raped. But we don't always get what we want."

"No, I suppose we don't." He traced the open collar of his black silk shirt, revealing just the top of a very hard, very well defined chest. Muscles curved in smooth slopes jumped as though my gaze was a physical touch. He chuckled and I looked up to see him watching me. "You want to hate me."

"I do hate you." I shrugged at his doubtful expression. "You're just easy on the eyes. Which I'm sure you know."

"Really." Without a twitch of warning, he closed the distance between us and took my cup. "Shall I prove you wrong?"

I skirted away from him, ducking and skidding from the bed. I might have been prepared to let him do what he would last night, but this morning I couldn't. I wouldn't. Not without a fight.

"Relax. I won't hurt you." He placed the mug on the table and then strode across the room. I swung at him and he caught my wrists. "Don't force me to tie you up."

"Don't don't don't." I whimpered as he wrapped his arms around me. Tears streaked my cheeks, gathered on my lips, hot and salty. I flattened my hands on his chest and dug my nails into his skin. "Vince . . . ."

"Shh." He pressed his lips to the top of my head and then bent down to whisper against my lips. "I want to show you something."

Seriously, too many romances are forgettable because they adhere too closely to these so-called laws of romance.

I write lots of scenes from the male POV.

I particularly like the first snippet. Though a buff male ready for action under the Christmas tree is good, too...!

I really want more about the little story snippet for #1 up there. :) That sounds like it could be good.

#1: Not sure it's a rule; I mean, how many times have you read a romance in which the heroine/hero dislike each other immediately & it blossoms into love? #2: you're right, does tend to be woman's POV--although that may change with growing male readership? #3: In my 1st 3 books the heroine is torn between two men--in fact, some have criticized that makes them too indecisive, but it's more realistic, isn't it? I mean, there are a LOT more than 1 or 2 gorgeous hunks out there...Anyway, interesting discussion--look forward to more! Meredith

Good luck with the newest release.