To what lengths for research?

I have a regular job, sadly, where I’m a medical biller and coder. While at the lunch table, we somehow got on the topic of snorkeling and scuba diving in Cancun. I off-handedly remarked that I have my “Open Water Diver” certification. My two lunch mates sort of looked at me. To which I said I was researching for a book I was writing at the time and my characters scuba dived. I wanted to be sure I knew what I was talking about.

One lunch mate remarked to the other, “Good God, I hope she doesn’t start writing about an ax murderer next!”

We all thought it was funny, but it did make me think about the fact that I love to research, almost as much as I love writing the story. It’s important to me and a point of pride that if I’m going to write about a character who does scuba dive, for instance, that I actually know what I’m talking about. Was it really necessary for me to take scuba diving lessons? I guess that depends. For me it was since I wanted to write from experience, not just based on what I read. For that novel, I didn’t want to bluff my way through it.

Over the last several years, I’ve been researching and writing about the Vietnam War. I obviously can’t experience it, but I do talk to vets who were there. For several years I even enjoyed the expertise of one Vietnam vet who worked in the entertainment industry as a military advisor for television and movies.

I’ve also handled an M-16 rifle and been inside a Huey helicopter. Again, it’s not the same as being there, but it gives me perspective. Understanding the “GI lingo” of the time, a colorful and often ribald mix that included Vietnamese and French, to me is important. And I can never have enough books on the subject.

The two main characters in my new release, Lost and Found, are both former military. Mark Connor is a Vietnam veteran who at 18 was drafted into the Army. Josh Myers is from another time. He joined the all-volunteer Marines because it’s what he wanted to do and survived the 1983 terrorist bombing of the Marine barracks in Beirut.

There are big differences in being a Marine or an Army soldier and it’s important to me to understand what those differences are. Mark and Josh verbally spar and name call, constantly. It’s part of the military culture. In Vietnam, the Navy and Marines called soldiers "dog faces" or "doggies". So when Mark calls Josh an "ex-jarhead" or even "cupcake", both popular Army slurs, it is natural for Josh to call him a "dog face". It’s an understanding where both of them came from. Josh may not have served in Vietnam, but he is a former Marine and in many ways, it’s an acknowledgment that he knows who and where Mark comes from.

Mark calling Josh a "cupcake" right from day one is not a slur on Josh’s sexuality, especially since Mark is also gay. It’s simply typical of an Army soldier to call a Marine a "cupcake". Name calling within the ranks and the services is not only common, it’s expected. My son is a combat medic with the Army National Guard and he was called a lot worse by his sergeants back in basic training. All of his buddies were. In Vietnam, the Army nor the Marines for that matter weren’t nearly so “PC”.

I don’t expect all my readers to understand that, but I still wanted that authenticity. Mark, whose lover was killed back in Vietnam, still goes back to Vietnam almost every day in vivid flashbacks and nightmares. He relives it as if he was still that kid almost 40 years ago, riding in a “slick” or “humping through the boonies.”

I wanted you to experience his Vietnam.

It’s important to balance it, though. Not everyone understands all the nuances and differences and they may not necessarily want to. It’s really easy to overdo it- use too much of the research. The old phrase, “Less is more” really does apply. I could easily overwhelm a reader with all things Vietnam, but then what would be the point? The struggle that Mark is experiencing, his growing attraction for Josh, that’s the focus of the story- not his past in Vietnam.

It’s also easy to offend someone, however unintentional. Slurs toward the Viet Cong (VC) or North Vietnamese Army (NVA) can be inflammatory just as slurs against Arabs and Muslims are today. Mark might remember and experience the VC by much less polite names, but using those terms can be highly offensive, even if historically correct.

I hope that I struck a nice balance of authenticity without overdoing it and that you, as my reader, experience just enough of Mark’s Vietnam to better understand his past and struggles. It was an incredible time in our history, one I can’t resist exploring and writing about and will continue to in my future projects.

I’d like to thank Lisabet for inviting me to speak here today. I had a great time and hope to come back again in the future! And remember to thank a veteran, no matter the time they served, as they served for all of us.

Lost and Found by Gwenna Sebastian is published with Lyrical Press: http://www.lyricalpress.com/ 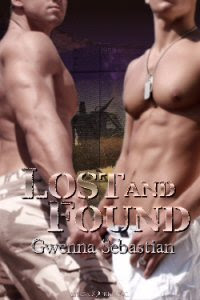 BIO: Gwenna Sebastian lives in upstate New York with her husband and three cats. Her son is a medic in the Army National Guard, having recently served in the Iraq war. Gwenna has been writing since she was fourteen and has taken a keen interest in the military, gays in the military and especially in the Vietnam War. She’s a vocal supporter of Gay rights, Gays in the Military and Gay marriage. When Gwenna is writing or researching for her next novel, she’s a full time medical biller and coder for a billing company and teaches medical reimbursement part time in the evenings.

I really admire your passion for research. You're a great deal more diligent than I am.

You anticipated my concerns about using too much special language. There's a delicate balance to be maintained between using authentic terms and confusing the reader. I write a lot of tales set in foreign countries, and have to make the same kinds of decisions about using foreign phrases. If some unfamiliar term stops the reader and pulls her out of the story, you've shot yourself in the foot (so to speak!)

Great post, Gwenna. I thought I was a research addict! You topped me. Most of mine's virtual, though I too am a stickler for authenticity, and the right details can provide that.
I'd add that in addition to balancing special language, you have to weave facts into the narrative that complement the story so it doesn't feel like an info dump and overwhelm the reader.
Congrats on your release!

Great post, Gwenna! For me, as a writer, checking the facts is number one important. I once had a teacher who always said, "If you don't know, ask." If I can't find what I need to know via one of th search engines, I pick up the phone or hit the bricks. It's amazing how helpful people are if you just ask them nicely. Good luck with your new release, it looks like a winner.

I'm quite a stickler for facts too. Lovely interview. Good luck with your book.

I'm obsessive about getting facts right in my historical books. I even have maps and floorplans of places like Knossos and Mycenae, lists of native flora and fauna, medicinal herbs, etc.

Enjoy the read, Gwenna. I also applaud your support of the military, and gays in the military. Let's hope their service receives more acknowledgement soon.

Thanks so much, Lisabet- I had a great time writing this article and was glad for the opportunity to present it here. And thanks to everyone for the lovely comments. Researching is such a passion of mine as is the Vietnam War. It's nice to find so many others who understand the efforts.

And to Louisa- I hope one day- soon- we are as accepting of our gays in the military as other progressive countries.

Wonderful post, Gwenna. I, too, go for that authenticity and will even scout locations to get scenes right. In one of my books I had a police stake-out of a house in Dallas. I scouted until I found just the right house with the building around it I would use to position the police officers. Doing all that scouting helped immensely when writing that scene.

I do a lot of research on the Internet for small details, but still prefer to see places and talk to people in person.

Enjoyed your post. I love accuracy in research, sadly not allowed so try to at least go for authenticity. Biggest problem I see is too many depending on the internet for research and missing a world off line where much info is found.
I'd love to see every place I write about, and in some cases, I do. The best research for some topics is old people with good memories. For others, well, being able to read original Latin mss helps and having a crit partner from Scotland who speaks fluent Gale and teaches history at the university level also helps.

Maryann and Mary- thanks so much! I agree with the comment about relying on the internet too much. I know people who think that Wikipedia is the total answer when I know or a fact it's got some glaring inaccuracies. Someday I do hope to get to Vietnam although it isn't the same Vietnam during the late sixties. But I do speak to and interview any vet who is willing to talk to me!

Thank you both so much!
Gwenna