Putting Your Butt in the Chair

To achieve any goal you have to make a commitment.

The biggest for me is putting my butt in the chair. If I'm sitting in my office, then I'll work. It might not be on a story, but it will be on something that advances my career. Whether that is working on the internet, setting up interviews, writing blogs for other people or developing characters, it is working toward my ultimate goal.

Instead, you have to spend time at your desk hammering out the frustration on the keyboard. That's how I wrote my latest release "Banished Witch."

In a way, Dannie and I are alike. We both have jobs to do, though at times we'd rather being doing something else.

I only wish I had her skill with magic. 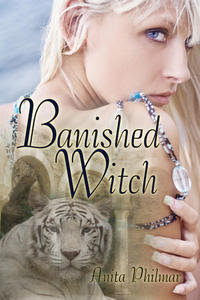 Once a princess of Ardenia, Danella, left her homeland to warn her childhood sweetheart only to be kidnapped and sold into slavery. Learning the dark magic from her keeper, she grew to accept her role as a witch to protect her family and track down the traitor to the crown. But when Omar Mandel, the love from her past, arrives to bring her home, she realizes she can never go home. That doesn't mean she can't use his assistance in her plan for revenge and, in the meantime, live out a few unfulfilled fantasies.

The queen wants her daughter to come home and Omar’s job is to see that it happens. However, Danella isn’t the same sweet girl he remembers. In her place is a sexy woman who excites his lust and claims his heart. He must teach her to trust in his love and face the sins of the past if they are to have a future together.

He followed the quick action of her fingers as she loosened her clothes. His blood raced through his veins in anticipation of viewing her luscious breasts. “And what animal do you usually change into?”

She tugged her blouse from the waistband of her skirt. "It varies. If I’m in a hurry, I usually chose a hawk or falcon and take to the sky. Otherwise, I might choose a coyote or jaguar so I can prowl a little on the way.”

When she dropped her shirt to the ground, he marveled at the creamy white swell of her breasts. The rosy tips drawn in tight peaks spoke not only of her arousal but the cool air surrounding them.

He automatically reached for her, but she avoided his touch by stepping back, then shoved her skirt down her legs. After shedding the multi-colored fabric, she wore only a pair of black, lace-up boots. “If you want to make it to my cabin before the light disappears, you better remove your clothes, too.”

The sight of her exquisite body held him prisoner. Full plump breasts lead to a narrow waist then widened into the round curve of her hips. The light bush between her legs revealed her natural blonde hair color. He smiled and grabbed her around the waist. “And what if I can’t wait until then to claim you?”

A sly grin kissed her lips before a tiny pop broke the silence between them. The smooth texture of her skin changed into the soft caress of feathers as she shrank. The tantalizing aroma of her transformation filled his loins with a barbaric thirst for sex.

A loud call pulled his gaze skyward as a hawk soared above his head. Words filtered through his head. Do you know the hawk’s waltz?

He recalled the mating rituals performed above the trees and envisioned the joy of flying.

After a small hop, he flapped his wings and raced after her. With their destination unknown to him, she quickly outdistanced him. He sped through the air and slowly closed the gap between them. Yes.

The wind rushing over his feathers fought to cool his carnivorous hunger, but the brief teasing fragrance of her lust continued to feed his desire. The sun, escaping the pursuit of the night beast, fell below the horizon. Red, yellow, and purple lights filled the evening sky.

Why flee? he called.

Her answer stroked his thoughts. Oh, but if you can’t catch me, what kind of pleasure could you really give me?

Inflamed by her words and the fire burning through his loins, he soared higher and charted the circles she drew beneath his flight’s course.

Marking her position, he took a steep dive through the center of her path and then moved in a sharp angle upwards. He repeated the maneuver several times, coming closer and closer to her until his wing brushed hers. On his climb back to the heavens, he grabbed her talons.

Interlock in a spiraling fall, her hoarse raspy cry echoed around him. The ache in his cock intensified. How much longer would she make him wait?

Posted by Lisabet Sarai at 9:03 AM

You are SO right. People think being a writer is easy--that it's glamorous--but mostly it is just hard work!

Lol, that's one of my saying, "Butt in Chair." I even have t-shirts.

Congrats on the new book, I wish you many sales.