Soul mates. The concept seems to drive many romance stories. Two people who just plain belong together, who were born to be together. Who see each other and are instantly in love. Who possibly knew each other in a past life and are reconnecting in this one.

But how realistic is it to believe that everyone has a perfect match out there somewhere? Do people really find their lost loves from past lives? Love at first sight is just a fairy tale, right?

I’ve spent a lot of years wondering about soul mates and true love. For many years, those musings came from a pretty cynical point of view. I was in love in high school—at least, at the time, from ages sixteen to twenty, I was pretty sure it was true love. And he loved me, too, I knew he did. Except for the whole part where he constantly told me that he didn’t love me because I deserved better. If true love and soul mates really exist, why didn’t he and I end up living happily ever after?

During my first marriage, for reasons I won’t go into, my cynicism became firmly entrenched. My first husband definitely wasn’t my true love or soul mate. Love didn’t even play a role in the marriage. By the time I ended it, fourteen years after we were married, I’d come to the conclusion that maybe true love existed, but it didn’t exist for me.

However, a tiny spark of hope lingered in my heart, which was why I turned to writing romance stories. At least in writing, I could ensure that people found their soul mates. A little bit of me appears in almost all of my heroines, and through them, I made true love exist.

Fortunately, in 2008 my cynicism was walloped upside the head and dumped into the bay. At a barbecue hosted by a friend I’d met through an online dating site (I wound up with a lot more friends than dates there, let me tell you!), I was walking through the yard when a man stopped me and introduced himself by his chat room handle. I introduced myself and looked into his brown eyes.

His face lit up. I was hit by a jolt like an electric charge. We chatted a little, we danced, we flirted. Before half an hour was over, we felt like we’d known each other forever. Before the end of the night, we were finishing each other’s sentences. By the next morning, we were answering each other’s questions before the questions were asked.

That was two years ago, and in April that man became my husband. And yes, I do believe we’re true matches, soul mates, whatever term you want to use. And I do believe we fell in love with each other, if not at first sight, somewhere around the second or third glance.

In my novel Eternal Love, coming July 8 from Pink Petal Books, Rhys Trevellian and Gwen Davies have a love like that. Well, sort of. Rhys is 935 years old, and has been in love with Gwen since childhood. The problem is, while Rhys is immortal, Gwen is mortal. In her first lifetime with Rhys, he left her because he didn’t want her to learn of his immortality. In her next seven lifetimes, Rhys found her and they rekindled their love, although since she’d reincarnated each time Gwen had no memory of any previous lives with him. And each time, she was murdered by fanatic immortals who wanted to keep them apart.

In the present day, Rhys again finds Gwen’s reincarnation, also named Gwen. Although she has no memories of him, she recognizes him instantly, and soon falls in love with him. Of course, he’s already in love with her, even though she has a different physical form.

Their love gets them through the aftermath of Gwen’s abusive relationship with another man, being chased down by the fanatics, and Rhys’s arrest by the immortal authorities for murder. Through it all, they know they belong together, and they know they’ll have their happy ending.

Just like real soul mates. If such a thing exists. 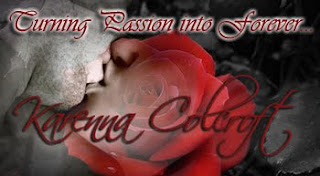 Karenna Colcroft is the alter ego of a relatively sedate mother, wife, and former teacher. She began writing at age five, and has been writing romance since 2006. She received her first publishing contract in 2009, and since then has published with several publishers, including Pink Petal Books, Siren, and Noble Romance. Karenna is fond of self-imposed deadlines, even when they make her tear her hair out, and is thankful for her supportive family. She lives in the northeastern US with her two daughters, her real-life romance hero husband, and two cats. You can learn more about Karenna at http://karennacolcroft.com.

Eternal Love will be available July 8 at http://pinkpetalbooks.com/index.php?main_page=product_info&cPath=26&products_id=113

What a wonderful story! I'm so glad that you found your happily ever after!

Thanks, Lisabet, and I really appreciate you hosting me today! I'll check back in from time to time today to answer any other comments or questions :)

Loved your blog. I'm a love cynic--I just write about romance the way I think it ought to be. But, I am so happy for you that you found your true love, karenna. I wish you every success with your new book, Eternal Love.
Sarah McNeal

Thank you, Sarah! I used to be cynical as well... hubby kinda persuaded me out of it. LOL

I'm still very cynical, but like you, that little spark of hope will always be there.
Lovely post. Good luck with the novel.

Its wonderful that you found your true love and your HEA.

Thanks, Lorrie and Janice :)

Oh! Karenna. What a beautiful blog. Thanks for sharing your story with us. I'll definitely keep an eye out for Eternal Love!

Eternal Love sounds really good.
I believe in soul mates, but I believe there are different kinds of soul mates, not just lovers. I have a musical soul mate that I connect with on a musical level, but not sexual. We can write songs together and it's always been easy for us to connect in a creative way since the first day we met.

Eternal Love sounds good. I do believe in soul mates. I think there is someone for everyone. The mystery and magic is in the finding of that soul mate. But I always hope to find mine.

I've had soulmate friends but not lovers. I wanna believe in it 'cuz it sounds so well, kool, but sadly all the couples I know that tout their soulmatedness end up divorced, I think b/c it's too hard to maintain that high level of expectation when u've been with someone for a really long time. Love doesn't stand still and if you're a free spirit like me, it;s hard to stay pinned down to the everydayness of marriage. My advice is just be happy you've found someone that gets you and that you like being with and throw the whole soulmate term away.