First I want to take a moment to thank Lisabet for having me on her blog Beyond Romance. It really is a pleasure to be here and for anyone who posts a comment, I’ll be dropping your name into a drawing for a signed copy of either SURVIVAL GAMES or DARK RECKONING based on the winner’s preference.

When I started writing again in 2007 I really had no clue of what I was in for. The journey has been wonderfully weird and I’ve come a long way from the newbie with no clue to gaining an understanding of the industry and all its quirky pitfalls.

One of my major mistakes along the way was not know what the hell I was doing with a query and because of that, I burned through my “most wanted agent” list quickly. So the most pertinent advice I can offer to the new writers on the block beyond writing a kick ass story is know what you’re doing with a query letter. If you’re not sure, join a writer’s forum like Backspace (www.bksp.org) and the folks there will steer you in the right direction - but you have to be prepared for some real stinging critiques - things that will thicken your skin for later in your career and help you grow as a writer.

I can tell you - that first acceptance is like a hazy dream, surreal and fantastic enough so you want to do a little jig and squee at the top of your lungs. Then the cover art, the editing, the approval of the proofs comes along followed by the wait. In my case, the wait was over half a year, which in the scheme of publishing isn’t so bad- but it was still excruciating. Then things start to happen closer to the release date - marketing campaigns, blog tours and then the reviews start rolling in.

Each review that pops up in my inbox scares the daylights out of me. I find myself holding my breath, praying and expecting the worst. I’ll tell you, I nearly fell out of my chair when that first review for Survival Games came in. Seriously, the subject matter is so controversial that I prepared myself for negative feedback across the board. But when a 4 star review came out from Manic Readers, I was stunned and then could hardly contain my excitement. I was at my day job, so I couldn’t jump up and down like I just won the lottery - but I have to admit- that’s the way it felt. The write-up blew me away.

It still does. So far the reviews on both my July releases have been 4 out of 5 ratings. Of course, the perfectionist in me would like to see five out of five, but I’ll take four out of five with comments like the book is a page turner and I couldn’t put it down until I found out who won the game.

Like that’s going to happen. Oh well - for the time being, I’m here on the virtual shelves offering up my wares to the general public and hoping like hell they like what they read enough to buy the next book and the next, and the next.

Both Dark Reckoning and Survival Games were released this month (JULY 2010).

DARK RECKONING: Available in both e-book and paperback at www.fidopublishing.com

A sadistic killer stalks the secluded college town of Brooksfield, New Hampshire. With bodies piling up and rumors of the murders being part of sacrificial hazing rituals, the FBI plants Special Agent Steve Williams in a fraternity at Brooksfield University. His investigation takes a ninety degree turn into the bizarre when he’s introduced to Jennifer, a clairvoyant co-ed who swears the killer isn’t human.

Steve considers the plausibility of the extraordinary, the unspeakable, even the inconceivable when his notebook starts bleeding cryptic messages. Messages that indicate Jennifer is at the heart of the darkness in Brooksfield.

When she describes her latest vision, a trail of violent deaths, including his, Steve asks the million-dollar question: Is Jennifer trying to help . . . or is she actually the one responsible? 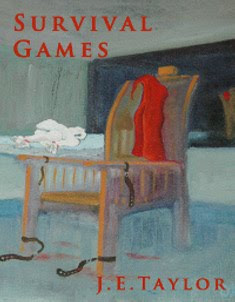 SURVIVAL GAMES: Available in both e-book and paperback at www.excessica.com

Jessica foils his plans, fires his passion, and frustrates the hell out of him. She never gives in to his demands, his pleas or his desires, and yet a psychic bond claims his soul and melts the iron walls around his heart. His obsession sparks a fierce rift when Frank wants to start filming. Ty stalls with any and every excuse in the book, fueling Frank’s fury, but he knows it’s only a matter of time before he loses this game.

With the clock ticking, he scrambles for escape options.

Ms. Taylor lives in Connecticut with her husband and two children.

Welcome to Beyond Romance. I definitely identify--how little we know when we first begin to publish!

Good luck with your books.

As a forty-year veteran of the publishing game, I can say it's not only what you don't know when you begin that's the killer, it's the constant changing of the ground rules which mean that what you learn so painfully will be out of date within five or six years.

Tiffany - agreed - but as with any business evolution over time should be expected especially if companies want to stay in business.

The challenge for those of us not in the thick of things is keeping up. :)

Lisabet: my first visit to your blog and I just wanted to say it is awesome. I have been exploring! *grin*

JE: thanks for the thought provoking blog. I cant imagine waiting for the first reviews to come out....you must be a nervous wreck at those times. In the 5-6 month waiting period you mentioned, what is going on with your book in that time period? I am not an author only a reader so I dont understand that wait....I mean you said you've already done proofs, edits, etc....

Probably a dumb question but I am curious! *grin*

Thanks for the good time and chance at a great prize!

Congrats on the release of your books. I am not a writer so I cannot identify with your experience with your getting published but I understand. Good luck with your writing.

Congrats on your releases! Enjoyed your insights, pretty much went through the same. Oh, and I bookmarked BACKSPACE. Thanks!

Joey - not a dumb question at all.

The hardest part is the wait - but during this time authors should be setting up things like a website, a blog, joining networking sites (if they haven't already), and generally lining up marketing campaigne plans.

Even so, there is a great deal of wait time. Luckily, I've been busy with both my assistant editorship at Allegory ezine and helping out at eXcessica by formatting manuscripts.

Most of the authors out there don't have a big budget for marketing and promotion - so we have to get creative and either hire a publicist or march out on our own to create a buzz about our work.

I've been lucky enough to have some great contacts like Lisabet and others - so I decided to wing this on my own.

Thanks for swinging in and asking the questions!

Now I'm going to hop off before the thunderstorm kills our cable service. :)

I'll be back once the storms pass through.
JET

The first wave of storms passed through and we still have internet service. Yay! :)

Thank you Loretta! Anyone who has waited for anything important knows the agony of time passing at a snails pace - kind of like a child waiting for Christmas morning.

And Sylvie - the forum was the best writing resource and support system I have found. Best $40 investment I made in my writing career.

Thanks for swinging in and commenting!

Congratulations JE. I love reading your thoughts. they really do inspire.

I applaud the courage & tenacity of writers. It must be so heart-breaking at times though.

Thank you buybooksonline and marybelle.

As far as heart breaking - yes, rejection is tough to stomach but it's all part of the process and being tenacious is part of the deal as well. The key is to learn from the rejections and if the agent or editor offers constructive feedback, to learn from it and improve our writing.

I try my best to offer something the writer can learn from when rejecting submissions. It's still tough because I've been on the receiving end and I know how it feels to get a no thank you.

Thanks again for visiting Lisabet's blog and taking the time to comment!

Just thought I'd jump in and offer another answer to joey's question (and thanks for your compliments, btw--you're always welcome here!)

First of all, the wait is now much shorter than it used to be. My first pub was in 1999, before epublishing and even before digital publishing tools were widespread. At that point, it was more than a year between contract and release. You almost forgot to be excited! Galleys were paper; they had to be corrected by hand and returned. All ms submissions were also paper--expensive and time-consuming.

For modern publishing, submissions are now mostly electronic and certainly editing and proofing are done electronically. Between acceptance and publication the publisher is typically involved with:

Five to six months seems a bit long to me but it depends on how many editors a publisher has compared to the workload. I just signed a contract for a book that will come out in November. So I guess that IS five months.

Meanwhile, aside from working on promotion as J.E. has said, the main thing an author should be doing is working on the next book!

All the best,
Lisabet

Maybe no Oprah but you might have a chance on Ellen. I seem to recall a romance novel being shown when they were on location at a tropical vacation spot. Caused a little buzz.
Can't wait to pick up a copy of Survival Games. Thanks for sharing.

Marybelle - you're the winner tonight! You can thank my husband - he picked your name out of a hat!

I'll shoot you over an email with the particulars. Thank you Marybelle and everyone else who took the time to read and comment and thank you again Lisabet for having me on your blog!