My Love Affair with Gay Romance

Morning/Afternoon (whatever it is where you are!)

Some of you might know me. I'm Jaime Samms. It sounds so pretentious to say 'multi-published author', but hey. I guess I am. I'm still kind of getting used to that. For the most part, I write my stories because I love to write. That other people might get something, even just an hour or two of entertainment out of my efforts is a fantastic feeling.

I started writing a long, long time ago. I started letting other people read my writing, well, less long ago. Why? Because I was a little concerned that maybe I was off my rocker. When I set out to write a fantasy story, I spent way more time writing about the two heroes of the story hanging out, chatting, and...flirting. And not with the bar maids, either. Imagine. So I turned the story into a romance, and introduced those heroes to the bar maids. And got nothin'. They thanked the pretty girls for their beer and turned back to each other.

I tossed princesses and lusty wenches at them, damsels in distress and adventurous women who knew what to do with the business end of a sword. They ignored them all. (Though the did get in a tiff over the princess' brother...)

But they made up. And this is where I finally gave in to the obvious. They just wanted each other, and it was time we all admitted that fact. The scene that followed... :D Use your imagination. I did. And honestly, I never looked back.

I never read a conventional romance again, either. I don't know why, but they just don't seem as...romantic. Is it because of the way society views the whole idea of two men (or two women) together, that in order for them to show their romantic side it encompasses a whole 'nother level of trust and courage and mutual understanding than it does for a het couple? I think that's what appeals to me the most, in fact. In the world as we know it, for the most part, there is an entire set of personal strength a guy has to have to admit his love for his boyfriend to the world that often het people don't even think about. Nobody looks or thinks twice about seeing hubs and I walk down the street hand in hand. But if I was a guy? Or he was a girl? It would require something of an extra effort on my part to make that gesture.

So there it is, in part. My love affair with the gay romance genre is all about that inner strength to stand up and say "This is my man. This is who I love." That appeals to me immensely, and it's a characteristic almost all the guys I write about either have, or are searching for.

As for that couple that started the whole thing, way back at the dawn of my writing career, I never did finish their story. It kinda sucked. (not like That!!!) Ooh. Maybe that was the problem.... Heh. In any case, they remain my archetypes, my muses, and some day, I hope maybe I'll write their story. Or maybe, I do every time I take up my pen. If you're interested in reading any of those stories, you can find them at the links below.

My latest effort: Good to Be Home, you can find at Loveyoudivine Alterotica. (The fIrst book in the series, Who Says Shamrocks Aren't Lucky, is free!!!) 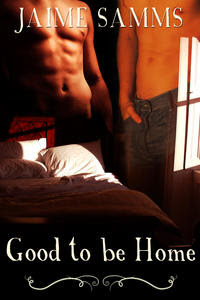 Blurb: Ian's budding relationship with David seems to focus on the one thing David is both fantastic at, and loves; sex. Ian's not sure he can keep up. When David's past comes calling, and David goes running, Ian is not sure what to think. He has no idea where he stands with his new lover, only that he's sure he doesn't want to share.

Excerpt: He was already getting out of the bed, wading through the dust floating in the sunbeams. The morning light shimmered through the hair on his legs and brightened his skin to a warm glow. Two weeks of watching him parade around my flat nearly naked most of the time and he was still the most beautiful man I'd ever seen. Or had the dubious privilege to piss off like that. I hopped out of bed after him.

He stopped, turned, hand on hip, and glared at me. "What?" He eyed my aching erection, but his expression didn't change.

"Do ye even know what for?"

I swallowed hard again but said nothing. So much for my erection.

"That's what I thought."

For a long minute, we both just stood there, watching each other. The sun dimmed. The room's temperature seemed to drop along with my hard-on. Finally, he shook his head and snatched up a shirt from his chair by the window.

I blinked. When had it become his chair? I guess since he sat in it every evening with a beer and a book, or a sketch pad, his feet tucked up, hair falling in his face, and just looked comfortable. And he'd only been doing it for two weeks. How fast had that happened?

"You can drive me home, yeah?" He disappeared inside his shirt for a moment, then yanked it down, stretching the tight fabric over hard muscle.

"Home. I do have a place of me own." He stood gazing about the room, bare arsed and sexy as hell, but clearly pissed. "Where the fuck are me trousers?"

"Here." I picked them up from where they were jammed half under the bed and handed them over. It was odd how my hand shook that much.

Good to be Home: http://www.loveyoudivine.com/index.php?main_page=document_product_info&cPath=6_62&products_id=679

Where can you find all this writing? Free on my website: www.jaime-jaime.samms.com

And coming soon to Dreamspinner Press.

Posted by Lisabet Sarai at 1:14 AM

Email ThisBlogThis!Share to TwitterShare to FacebookShare to Pinterest
Labels: Good to Be Home, Jaime Samms, Shamrocks

Welcome to Beyond Romance! I think that you have to listen to those voices that direct your writing. You really can't force your plots or characters to do what isn't natural for them.

I also really agree with your insight on why gay romance is so satisfying. Having a same-sex relationship is still harder than a het relationship, in my opinion. There are so many things left unsaid.

Well Jamie thank you for giving us a little insight to your talent. You are brilliant you just don't believe yet but we will work on that honeychile. Cinders

Good luck with your book, but as your 'multi published' I think you already have enough lol. Mind you, it's always nice to have a little more. Loved the excerpt.

Jaime, isn't it fun how characters sometimes know better than we do what we should be writing? Cool how you "stumbled" into writing M/M. Congrats on your book; it sounds great!

I love that you are looking for the deepest and best parts of your characters and that you take us along for the ride.

Thanks for inviting me over, Lisabet. You really do have to listen to the way the story is unfolding, don't you?

Part of writing romance is about writing fantasy, I think, but part of it is so much about writing people in all their flaws and struggles and strengths. It doesn't get much better....

Thanks, Cinders. I guess I'm still getting used to the idea that people are reading my stories. Kinda fantasic. :D

Thanks, Margaret. Never let anyone tell you luck has nothing to do with this business. Of course, I also believe you make your own luck, with hard work, but a bit of extra never hurt!! lol! Glad you enjoyed it.

Karenna, I always had the hardest time defining why, because it seems I just...always did. It's the most natural thing in the world to me. Don't know why I fought it even a little bit.

Susie, the best thing in a story for me, when I'm reading, is seeing the characters find that thing in themselves that answers their own needs. I love bringing characters to that point.

Hi Jaime!
What? You didn't even mention that two hunks are better than one!!

Keep giving us those wonderful heroes who are into each other, girlfriend!

Oh I love this, kind of the same thing I admire about my characters when I write my lesbians. And i agree with you on the reading choices too. Plain het. just kinda sucks now after enjoying so many wonderful GLBT themed stories. It seems like there is something extra in those characters that the straight stories lack. And the excerpt left me wanting to read the story so bad to see what he had done to piss off his lover so much. Fabulous as always,
Beth

Loved your blog, Jaime! And love the excerpt! And it is wonderful to follow your soul in writing.

I personally can't limit romance to just men/men, women/women or even man/woman.

To me, romance is of the heart and is genderless. And if it's true romance, true love, no matter who it is, I love it.

I don't READ much het romance nor write it, it IS too conventional for the most part, but there are some worthy offerings out there.

I've found my heart leading me exactly as yours has...writing gay romance. Don't know why, it just has happened and it is as natural as can be for me now. Not doing it for a cause or making a stand, but just because it, as everybody has said, is speaking to me. To try NOT to write it would be like trying to catch Niagara Falls in a teacup. Impossible.

Keep up the good work, which is wonderful by the way!

Well, Lynn, I thought that went without saying. Besides, sometimes, even the toughest guy needs saving, and who better to come to the rescue than his knight in shining armour, right? And rest assured, i have every intention of continuing. :)

I agree, Beth. There is something...brave? Honest? about a really good GLBT romance that just hits home for me. As for what poot Ian did, he has a habit of speaking, then thinking...

Desi, I'm glad you all managed to find a balance :)

You make a very good point, Carol. Romance and love shouldn't suffer from gender barriers. I'm like you. I never imagined there is any cause or anything behind my writing. It's just an expression of who I am and what's importnat to me. That other people enjoy it too is gravy. :)