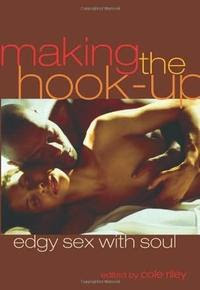 “Three Kisses” by Preston Allen leads off the book by boldly satirizing the stereotypes Riley wants to demolish. Docta Love is a high-rolling gambler, dripping with gold, more super than Super-Fly. He sets his sights on a glorious fat-assed, big-bosomed Puerto Rican casino dealer, but she leads him a merry chase before she'll satisfy his lust in the back of his souped-up Lovemobile. There's a twist, though. Neither the good Docta nor his prey is exactly who they pretend.

“Hung” by Zetta Brown is one of the best-crafted tales in the volume. Ms. Brown gives us a forbidden encounter between two members of a sequestered jury. The sex is hot, but what made the story stand out for me were the finely observed sketches of even the most minor characters.

Tenille Brown's “Lonnie's Licks” offers a believable pair of friends and fuck-buddies, one of whom has a dangerously addictive personality. This tale eschews the temptation of happily-ever-after for a more realistic conclusion that satisfies from a narrative perspective, at least.

One of my favorite stories is about fantasies unfulfilled, lust ultimately denied. Eroticism derives from desire, not necessarily its release; Leone Ross demonstrates this beautifully in the lyrical “When the River”, a tale of unconsummated attraction between two chance-met strangers. In this story, “blackness” is not a primary focus, but the culture and history of the characters is always present in the background:

She found the country an odd place, not green or red or orange like Trinidad, where all things, especially secrets, were Technicolor, but instead full of rare moments of light: a brilliant flower in amongst the shadowy walls, a flag on a car whizzing past, or the calm eyes of this man of integrity whose room faced hers on the other side of the hotel courtyard. They met in the middle, laughing at the queer accoutrements on show: a game of bowls set out for visitors; a giant chess set with figures as big as a small child and a brilliant blue and purple peacock stalking around a cage in the background.

Finally, I want to mention “Velvet” by Fiona Zedde, the only lesbian tale in the collection. This coming-of-age story about a college freshman's deflowering left me on the edge of tears.

Raven looked away from Sara to the discarded velvet dress on the floor, the balled up panties. “What did she do to you?”

“Nothing I didn't want.”

“Is that really true?”

Was it true? Had she wanted Rille to feast on her like a snack, to peel away her wrapping, gorge herself and leave Sara vulnerable and empty, on the balcony?

The tale awoke all sorts of memories of desires fulfilled in unexpected ways, of my own lost innocence.

Not every story in this book deserves praise. Some of them bore the marks of inexperience: lack of focus, excessive verbiage, drifting points of view. Others offered little in the way of originality or were just plain implausible. Nevertheless, this collection is worth reading for its stronger tales, which give voice to the multi-faceted nature of Black sexual experience.

Posted by Lisabet Sarai at 1:56 AM