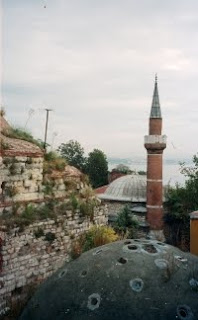 My first international trip, and really my only one without K., was a five week sojourn in Spain. My companion was a dear college friend who just happened to speak fluent Spanish and was an expert on Spanish culture and geography. Like I said, I'm a lucky woman! We had an open air ticket and criss-crossed the country, spending time in Madrid, Malaga, Torremolinos, Cadiz, Toledo, Granada, and Barcelona. We even managed a week-long side trip to Morocco.

That holiday was my only backpacker adventure. Neither B. nor I had much money but at that time Spain was very cheap. We slept in pensions for five dollars a night and shared two dollar carafes of vino tinto. We ate tapas in the cafes and chatted up the local guys. (Well, B. did. I spoke a bit of Spanish but realized before long that I must sound like an idiot because I knew only the present tense and so couldn't express any kind of complex idea at all.) We watched free flamenco and marveled at the Moorish filagree of the Alhambra and Gaudi's surrealistic cathedral.

For a long time, when K. and I had a chance to travel, we headed for Asia. Lately, though, we've been expanding our experience with Europe. We spent a wonderful ten days exploring historic, picturesque Provence. The twelfth century abbey of Thoronet provided me with the setting for one of my most popular stories, “Communion”, which has appeared in five different collections.

On a more recent trip, we visited Vienna, Venice and Trieste, then spent a week traveling down the Adriatic coastline of Croatia. The fortified Renaissance city of Dubrovnik has to be one of the most amazing places I've ever visited. Other European trips during the last decade have seen us in Heidelberg(Germany), Lisbon (Portugal), the Greek island of Rhodes, and Amsterdam (the Netherlands). The only one of these places to appear in my writing so far is Amsterdam. My story “Shades of Red”, in my collection ROUGH CARESS, is set in that city's infamous red light district.

Two very special European locales, for me, are Prague (the Czech Republic) and Instanbul (Turkey). As it happened, we visited both of these cities on the same trip (since we traveled to Turkey via Czech Airlines). Although extremely different, both places offer a thousand years (or more) of history and unique cultures. Surprisingly, I haven't yet written anything set in Turkey. However if you read my vampire story, “Prey” (on my Free Reading page, http://www.lisabetsarai.com/freereads.html), you might get a sense of Prague's mystery.