Putting the Spice in Your Writing

My mother is not an adventurous cook – and that is putting it very politely. Growing up, a standard dinner consisted of poached chicken breast (which gives it no flavor whatsoever) and over cooked zucchini (which leaches out all of the flavor). Give me a second to shudder at the memory. It’s a wonder I grew up to be such an adventurous foodie.

I’m sharing my childhood trauma with you because writing is similar to cooking. As a contest judge, I’ve read more than my fair share of flavorless entries. Even with correct grammar and a forward moving plot, a book can still fall flatter than a whisper-thin crepe. That is the difference between a simple narrative/dialogue exposition and a full fledged story. Details are the seasoning. What is spaghetti sauce without herbs and spices? Ketchup! Who wants to eat a plate of pasta covered in that? But once you add oregano, fennel, salt, pepper and red wine, now you have a sauce.

But just adding in a little color isn’t enough. Identifying each speaker as they enter a scene by describing their clothes leaves the distinct impression a writer worked off a checklist. In addition to stark details like a blue shirt or blond hair, you want to add in finer points that transmit the feel of the character. Which description do you like better:

Mrs. P. was an old lady who liked to gossip.

With a smack of her loose dentures, Mrs. P. leaned across the counter. She had a reputation for twisting and squeezing to extract every last drop of gossip, leaving her victims as raw and wrung out as an over juiced orange.

One more choice for you to ponder:

A man who must be a photographer stepped forward. He wore a blue polo shirt that matched his eyes and was heavily muscled.

A tall man with a camera around his neck, one in his hands and another in a pouch at his waist stepped forward. His biceps strained against the confines of his aquamarine polo shirt identifying him as crew. Eyes almost the same color as his shirt twinkled from behind horn rimmed glasses.

If you have trouble with this, I recommend pounding out your first draft. Then go back and, only by using the cues in what you’ve written, try to draw a picture of the scene (no actual drawing talent required). If all you have are two naked stick figures on a blank page with maybe one doorway, then you’ve left out some vastly important minutiae. This process can help you identify the holes where you need to work in descriptions. Does this mean you have to describe every item on a desk from the keyboard to the post-it notes to a legal pad? Of course not. Mention a cluttered desk, buried under listing stacks of paper. Or a chrome and glass desk with every item lined up with military precision. You’re picturing two very different people, different rooms at this point, aren’t you? And therein lies the fun.

A story with depth and richness resonates with readers. It gives them an emotional buy in, and transports them away from their everyday lives into the multi-layered world you’ve created. Because would you rather have a five course meal, or a sandwich of lettuce and mayo on white bread?

You can learn more about Christi and purchase her book at www.christibarth.com .

Blurb: Put a workaholic Yankee together with an amiable Southerner and watch the sparks fly! Annabelle travels to Charleston, where she stumbles across the trail of a long-buried Civil War mystery and along the way finds steamy passion, steadfast friends, mortal danger, and the love of her life. 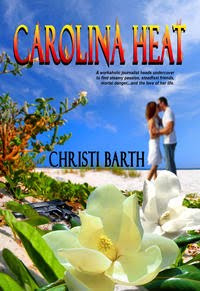 Well-known journalist Annabelle Carlyle is stunned by the personal twist of her latest assignment: her best friend Vanessa is missing. Annabelle goes undercover in the Old South to search for answers. Full of thick accents and a way of life rooted in the past, Charleston is as foreign and strange a place as any she's visited. Before finding a single clue, Annabelle encounters a sexy man she can't shake. Tall, dark and charming, Mark Dering is happy to show the gorgeous Yankee his hometown. He's captivated by the quick witted, quick tempered redhead. But when they're shot at, he realizes she's far more than just another tourist. Soon they're deep into a mystery that goes way back to the Civil War. For once Annabelle is in over her head. Desperate to find Vanessa, she reluctantly accepts Mark's help and it isn't long before romance blooms. The stakes grow higher when a body is discovered. Someone is willing to kill to keep a century old Confederate secret hidden. With her best friend missing and a killer on the loose, it's the worst possible moment for Mark to try and unlock Annabelle's heart. Or is love exactly what her life's been missing?

Annabelle pushed through the baggage claim doors and stopped dead as a dense wall of humid air immobilized her. No, it was more like being slowly smothered. The humidity was a wet blanket lying over the entire city of Charleston and it sapped the tiniest dreg of energy she had left.

Spotting a cab idling in the pick-up lane she hurried forward, wincing as her laptop case banged against her hip. A quick shrug brought the strap back onto her shoulder. It also threw her off balance enough to slip right off the edge of the curb. Her knees crumpled. Exhaustion dulled her reflexes, so she was on her way to the ground when a well-muscled arm sprinkled with curly black hair shot forward and grabbed her wrists, keeping her upright. "Careful there. I guess it's too late to tell you to watch your step?" Annabelle stared at him for a moment without responding. The only thought in her brain was Wow! The man had to be several inches over six feet, and every speck of skin she could see was tanned. The way his muscles bulged under the plain white T-shirt told her his amazing physique didn't come from weekly visits to a gym. And were those really dimples bracketing his smile? "Uh, thanks," she said belatedly. This behavior was ridiculous. She'd interviewed world leaders, celebrities, but was struck dumb by a complete stranger in an airport parking lot? Another part of her brain catalogued how well his deep black eyes were offset by his olive complexion and thick, black wavy hair. "Are you okay?" "What? Oh, yes, I'm fine. Apparently too tired to walk a straight line, but overall I'll live." His dimples deepened. "Good to hear." "Thanks for catching me. The way my day's gone, I would've fallen and broken my wrist." "Pleasure's all mine. Now I can scratch `rescue damsel in distress' off my to-do list." "Hmmm. When you look at it like that, it's almost as if I did you a favor," Annabelle teased. "Then I should pay you back. Would you let me buy you a drink?" This guy was smooth. And fast. On the other hand, this was the most fun she'd had in days. He cocked his head to the side. "Come on, take a chance. I promise – no nefarious schemes. I'm gainfully employed, straight, single, and I think this could be fate. After all, it isn't every day a gorgeous redhead falls right into my lap." "I appreciate the offer, but I don't even know your name," she stalled. "I'm Mark." "Annabelle." "It's a genuine pleasure to meet you, Miss Annabelle." His voice was flat out amazing. The vowels oozed like warm honey from between the consonants. This was her first encounter with such a thick Southern accent, and she was completely enthralled by his slow Charlestonian drawl. She realized her hand was still clasped in his, and abruptly pulled free. Annabelle didn't make a practice of standing in the middle of the street gaping at a man, even if he was unbelievably handsome in a brawny sort of way. As an investigative reporter she was used to meeting people, quickly cataloging her first impressions, and moving on. Being phased by a syrupy accent must be an oddity brought on by the extreme heat, she decided. This weather was enough to melt even her composure!

Thanks for being my guest at Beyond Romance. I like your examples. And Carolina Heat sounds sizzling!

Christi,
I need to print this out and post in on my computer as a constant reminder. But hey, that's why I have you to critique me :)