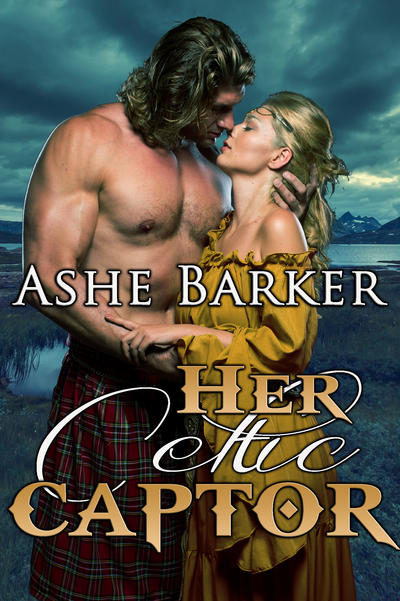 I have always been fascinated by Vikings. Strong, sexy warriors, ruthless, dominant and determined – what’s not to like? It was only a matter of time before I wove a series of stories around these fierce raiders who rampaged through Scotland and England for over three centuries, eventually settling and leaving their indelible mark on our history.

A Viking raid was indeed a ferocious affair. They relied on what would nowadays probably be termed ‘shock and awe’ swooping in from the sea on their fast dragon ships to attack with vicious and deadly effect. The Nordic raiders would be gone almost as swiftly as they arrived, leaving a trail of destruction in their wake. The modern equivalent would be a helicopter attack on a sleepy rural village by SWAT teams armed with automatic weapons– the local people would hardly know what hit them.

Her Celtic Captor is the third in my Vikings series of stand alone stories. It offers glimpses of characters from the first two books, but essentially it charts Brynhild and Taranc's turbulent journey. She is a Viking noblewoman, he a Celtic slave taken in a Viking raid on his Scottish village. The tables are turned when a tragic mistake places her in his power, and then the sparks really fly.

I have employed a certain amount of poetic license, but in creating my stories I was determined to recreate the Viking era to the best of my ability – their homes, their clothing, what they ate, how they lived. I hope readers will be as entranced as I am by these creative and charismatic raiders, and perhaps forgive them their more outrageous little foibles.

Taranc might lust after the Viking noblewoman, he was a male and drew breath so how could he not? But he did not like her, and he had never yet fucked a woman he disliked.

As the sister of a powerful Viking chief, Brynhild Freysson is used to giving orders and having them obeyed, which makes it all the more difficult to accept when she suddenly finds herself at the mercy of a Celtic warrior intent on bringing her back to his village whether she likes it or not.

Taranc was a leader of his people before he was taken captive by Viking raiders, and now that he is a free man once more he has no intention of allowing a headstrong Norse woman to slow down his journey home with her stubborn disobedience. When Brynhild refuses to do as she is told, he wastes no time in baring her bottom for a thorough switching, and he makes it quite clear that she can expect even more painful and humiliating punishments if she continues to defy him.

Though her hatred of the Celts runs deep, Taranc’s stern dominance awakens desires in Brynhild that she thought she would never feel again, and when he takes her in his arms and claims her properly it is more pleasurable than she would have thought possible. But though her passion for him grows by the day, can she ever truly love a man whose people are enemies of her own?

Publisher’s Note: Her Celtic Captor is a stand-alone sequel to Her Rogue Viking and Her Dark Viking. It includes spankings and sexual scenes. If such material offends you, please don’t buy this book

Yes, she was scared, and Taranc believed this was real. Her submission might be forced, but she recognised his power over her however much she might deplore it and had abandoned her attempts to resist, to refuse to cooperate. She might yet learn a valuable lesson this day.

Taranc took the blanket and tugged it away from her body. Brynhild flinched as the cool morning air caressed her naked back. She opened her eyes to meet his gaze, her expression fearful. "Please..." she mouthed.

Taranc moved in close and lifted the heavy length of her unbound hair which cascaded down her back. He draped it over her shoulder and on impulse bent to kiss the top of her head. "This will be quick, Brynhild. I promise. And you will come to no harm."

She closed her beautiful azure eyes again, and nodded.

Taranc wasted no time in retrieving his belt which had been flung to the deck in the scramble for the knife. He removed the empty sheath and folded its length so he could grasp the metal buckle within his fist. He walked back to where his captive leaned against the solid wooden pole, her body shivering. The marks of her previous punishment still streaked her pale buttocks, and Taranc believed he had never seen a sight more beautiful. Brynhild Freysson might be the most difficult, complicated and frankly demanding woman he had ever encountered, but she was without doubt the most lovely. If their circumstances were different...

He gave himself a mental shake. The circumstances were not different. They were what they were—awkward, dangerous and bloody inconvenient. He would do what must be done, and she would bear what she could not avoid. What came next he had not the faintest notion, but he would feel his way through this…somehow.

Her lips tightened into a grimace. She made no further response.

"Ten strokes. I shall count. You may make all the din you like since we are far out of port and none but the gulls will hear you."

A single tear escaped the corner of her eye and snaked its way across her pale cheek. Despite her reluctance to embrace the mast a few minutes ago he noted that she gripped it like a devoted lover now.

The belt whistled through the air. Brynhild let put a startled yelp even before the leather connected with her quivering rump then danced on the spot as the stripe bloomed on her skin.

"One." Taranc shifted his stance to lay the next stroke a little lower and swung again.

"Two," he announced as Brynhild gasped and whimpered against the mast. She clung to the beam as though drawing comfort from its solid warmth.

"Three." He paused to allow her to take several much-needed breaths as she hopped from one foot to the other. Her bottom glowed red and he could almost feel the heat from where he stood.

"Are you all right?" He was impressed at her fortitude thus far, but felt compelled to ask even so.

Her answer was a tight nod and a flattening of her lips. Her body was rigid, her punished buttocks clenching hard as she anticipated the next stroke.

"It is less painful if you soften your bottom," he advised.

"How do you know? Is this something you learnt from your betrothed? How often did you tie Fiona up and whip her naked bottom?"

A fair enough question, he surmised, though he considered it ill-judged of her to ask it right now. He was tempted to increase the punishment by a further two strokes but decided that might be unduly harsh. "No, I never had occasion to do so. I always found Fiona to be sweet-natured and compliant. You, lady, are an entirely different matter."

And privately, he thanked the sweet Lord for that.

Ashe tends to draw on her own experience to lend colour, detail and realism to her plots and characters. An incident here, a chance remark there, a bizarre event or quirky character, any of these can spark a story idea.

Ashe lives in the North of England, on the edge of the Brontë moors and enjoys the occasional flirtation with pole dancing and drinking Earl Grey tea. When not writing – which is not very often these days - her time is divided between her role as taxi driver for her teenage daughter, and caring for a menagerie of dogs, tortoises. And a very grumpy cockatiel.

Ashe has a pile of story ideas still to work through, and keeps thinking of new ones at the most unlikely moments, so you can expect to see a lot more from her.

Ashe loves to hear from readers. Here are her social media links:

Welcome back to Beyond Romance, Ashe.