[My sneak peek this Monday is an apocalyptic sci fi romance by Shoshanna Evers called The Pulse. Sounds intense! This is part of Shoshanna's blog tour, and she's giving away a $50 GC to one person who enters her contest. Use the Rafflecopter widget at the end of the post! And good luck! ~ Lisabet] 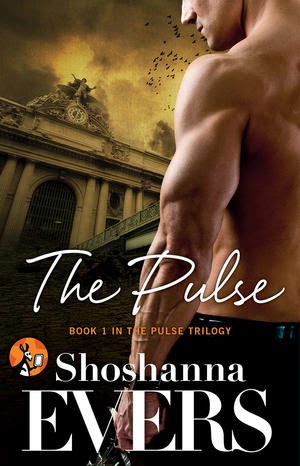 Emily Rosen lives in a military camp at Grand Central Station, where women sell their bodies to soldiers for extra rations. When she discovers a dark secret—that America is rebuilding outside of New York City, and everything the city’s refugees have been told is a lie—she escapes, the soldiers hot on her heels…

But Christopher Mason, a convict who broke out of prison after the Pulse, finds Emily first. Although he’s survived this long on the streets by looking out only for himself, Emily is beautiful, alluring, and impossible to leave behind.

Now Emily must convince this intimidating, magnetic stranger to be her guide as they journey out of New York and into the unknown. She’ll barter with her body, but sex with Mason can never be currency—it’s pure passion, and everything she desires. Despite the crumbling world around them, can Emily and Mason discover true love blooming in the darkest of places

“Look at me,” Emily said soothingly. “I need to see your pupils.”

She peered into his eyes. In a perfect world, she’d shine a flashlight in them, but there were no flashlights. The only light she had now streamed in through the dirty glass panes of the windows.

Mason leaned forward on the cot and grabbed her wrists. “It’s you,” he said groggily.

“I remember you. I saw you that day, when they picked you up. When you got brought in.”

Emily looked at him in horror. He was from the camp, he had to be. She shrank away from him, feeling her heart race. The washrag hung limply from her hand.

Focus, don’t be blinded by fear.

“I remember you. When they took you away, it was me, hiding behind the cab,” Mason said, staring intently into her eyes. “Are you okay?”

She remembered him now, the man who held his finger to his lips. At the time she had assumed he was hiding from the soldiers, just like she had been.

“You—you’re not one of them?” she asked, hating how weak and scared she sounded.

“No. I’ve got my reasons to hide from the law. Like you, I imagine.”

She laughed, a dry barking sound. “Not like my reason.”

Quickly, she quieted herself. The less he knew about her hidden radio, the safer for both of them.

“Are you . . . Why are you hiding, Mason?” She had to know, as much as she didn’t want to. He was the only man around she could possibly trust—if he truly had nothing to do with the soldiers.

As much as she wanted to make it on her own, it didn’t hurt to know who her friends were—and her enemies.

Suddenly, he looked at her suspiciously. “I should never have told you my name.”

“I’m sorry,” Emily whispered. “I saw the tattoo, on your arm. I thought maybe you had been in prison.”

“Do you know what they do to prisoners now, Emily?”

Emily looked at him and cocked her head. “My understanding is they let all the petty criminals go. The ones who were murderers, rapists, pedophiles and psychos they . . . they shot them. Killed them all so they wouldn’t take up valuable resources.”

“They kill prisoners, huh?” Mason said, staring at her intently, holding her wrists. “So what makes you think I want you spreading rumors about me being in prison?”

He dropped his hands then, as if suddenly realizing what he was doing. “There’re no computers to track me. No fingerprint files. I’m a blank slate now, and I intend to start over.”

“What did you do?” she whispered.

“I’m not going to hurt you,” he said. “And that’s all you need to know. Understand?”

“Okay,” she said softly, and picked up the rag to finish cleaning his wound, grateful to have a task to keep her focused. He wouldn’t need stitches, but she’d have to check him every fifteen minutes or so for a while to make sure he wasn’t suffering from a brain injury.

Not that she could do anything for him if he was. If his head injury was truly serious, then he would just go to sleep and die. She wasn’t about to do brain surgery. She couldn’t even if she knew how.

His T-shirt was saturated with blood—scalps tend to bleed a lot. “Can you . . . take off your shirt?” she asked tentatively.

“You don’t have to do this,” he said. His face looked flushed, a deep pink coloring his previously pale cheeks. “I’m not—I don’t expect you to—”

She took a step back. “No! That’s not what I meant. I just—your shirt is ruined. Bloody. I can wash it.”

He turned his face from her for a moment as if trying to compose himself.

“Where you gonna wash it?” he asked as he pulled the filthy shirt over his shoulders.

She glimpsed tight abdominal muscles and an incredibly large, smooth chest before the shirt came completely off . He had a sprinkling of crinkly dark hair leading down around his navel, trailing into the waistband of his cargo pants.

Emily sighed. “I don’t know. But I bet one of the shirts I took with me from Grand Central will fit. Might be a bit tight,” she acknowledged as she ruffled through a worn backpack. “Here.”

It was definitely too small, outlining all of his muscles in stark relief.

Buy from Amazon, or your favorite bookstore: 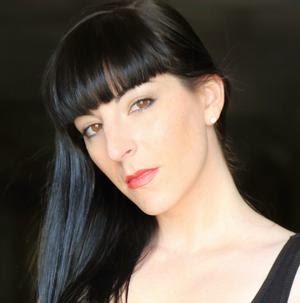 Shoshanna is a New York native who now lives with her family and two big dogs in Northern Idaho. She welcomes emails from readers and writers, and loves to interact on Twitter and Facebook.

Use the Rafflecopter widget below to enter Shoshanna's drawing!

Welcome to Beyond Romance, Shoshanna! I absolutely adore your cover. New York City is such a great place to imagine apocalypse...

Love your head shot too!

Good luck with the book and the tour.

glad to have the chance to hear about your new book and it sure sounds good.

You are a new author to me, the book sounds good.

The book sounds great... thanks for sharing a bit of it with us! Happy Blog Tour!

Thank you so much for hosting me! I'll be checking back in later :)