The Challenge of Writing Science Fiction

I imagine the challenges of writing sci-fi will depend a lot on the writer. Every writer has their strengths and weaknesses, regardless of genre. Some struggle with dialogue, some with pace, some with relatable and complex characters. Sci-fi writing just adds more possibilities, and more ways to go wrong.

The biggest challenge for me is that I’m not particularly “into” science. I excelled in the language arts through school. I did well in science, but it wasn’t my “thing.” I wanted to imagine up fantastical worlds but wasn’t much concerned with how they worked. Sure I read and watched lots of sci-fi, but I let my mind skim over the details.

Well you can’t get away with that once you’re actually writing for an audience, especially an audience that is more likely than others to care about how it works, and to know when you’re wrong. Yikes! Talk about pressure. Wikipedia’ing it just ain’t gonna cut it.

How did I make it worse for myself? My main character in FIGHTING GRAVITY is a physicist. A physicist a few hundred years from now. A cutting-edge physicist who discovers things people then don’t know about, much less now. Well WTF do I know about that?

So, for me, the research into science and technology has been what keeps me up at night.

I think, though, that this works for me too. As much as it gives me the cold sweats thinking a physicist might pick up my book and tell me I’ve gotten it completely wrong, I think it helps my less-than-geeky readers. When I refer to a concept or piece of technology I’ve struggled to understand, I’m not even slightly tempted to get all info-dumpy about it and wax long and eloquent on how it works. Even sci-fi readers don’t often have much tolerance for that. Besides, it always slows down a novel’s pace.

What I really want to be the focus of my stories, what I read for, what I write for, is people, relationships, characters I hurt for and squeeeee for. It think that’s what’s most important in any genre, because that’s the core of the human experience, it should be at the heart of any novel too. It’s why FIGHTING GRAVITY is, first and foremost, a love story.

At the end of the day, I’m content that I’ve written science fiction in which my science and tech isn’t “wrong” or impossible according to what we know today. (Improbable I can live with, even court. That’s the point of writing speculative fiction, isn’t it?)

What about you? If you were (are) a writer, what would be (is) the biggest challenge for you to write in your chosen genre?

When Jacob Dawes is Selected for the Imperial Intellectual Complex as a child, he’s catapulted from the poverty-stricken slums of his birth into a world where his status as an unclass is something no one can forget, or forgive. His growing scientific renown draws the attention of the emperor, a young man Jacob’s own age, and they find themselves drawn to each other in an unlikely, and ill-advised relationship. Jacob may have won the emperor’s heart, but it’s no protection when he’s accused of treason. And fighting his own execution would mean betraying the man he loves. 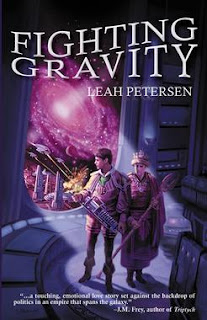 “Happy birthday, by the way,” I said one evening almost a week later as the emperor accompanied me from the dining hall to the lab.

“How did you know it was my birthday?”

“OK, I should have known that. I suppose I mean, why do you know?”

“In my position, I’ve found curiosity to be an asset. I don’t believe there is such a thing as knowing too much.”

“I’m older,” he added after a long silence. I raised my eyebrows. “Only about six hours, but it counts.”

I had to laugh. “You’re one of the most powerful men in the galaxy and it matters to you whether or not you’re older than me?”

He shrugged. “Wouldn’t it matter to you?”

“That’s not the same thing. There’s a huge power differential between us. At least age would be something I’d have over you.”

“I get the feeling that power doesn’t mean that much to you.”

“Unless you mean as a function of energy.” I grinned at him. “No. I have no need for it. It would get in the way of my work.”

“What did you do for your birthday?” he said after a pause.

“Haven’t you made any friends aboard ship? I know it’s only been three weeks, but you don’t seem to be the kind of person who would have trouble making friends.”

“Maybe you don’t know me very well. In my experience, there aren’t many people who are interested in being friends with me.”

“Maybe it’s they who don’t know you very well.”

I frowned, puzzled. When I looked at him again he was watching me. “And what have you concluded?” he asked.

I thought about that before I replied. “You’re confusing,” I conceded.

He grinned. Reaching into his pocket, he produced something and handed it to me. “Here. Happy birthday.”

He’d given me a small box. I looked at him, surprised, but when he said nothing further I opened it. Inside was a pair of platinum cuff links with a raised imperial crest on them. “I thought they might be less objectionable than a ring.”

I frowned. “I didn’t get you anything.”

“I assure you, I don’t need anything.”

“Neither do I. That’s not the point.”

He shrugged. “It’s the thought that counts. We’ll just say you gave me something.”

“I’m sure you can say whatever you want, but I never thought of giving you anything.”

He stared at me in shock and then started laughing so hard he had to stop walking. We stood in the middle of the hallway and I watched both directions as I waited for him to get control of himself. If someone came along and saw him like this, it wouldn’t go well for me. When he caught his breath he said, “You never thought of giving me anything.” He repeated it as if it was the punch line to a good joke. “Not even just now, when I gave you something?”

“Well, whether you realize it or not, you’ve been giving me a gift for the last ten minutes,” he said.

I grimaced. “You’re not going to say something weird like ‘the gift of your company,’ are you?”

He doubled over with laughter again. “No,” he answered when he’d composed himself. “No, I was going to say that we’ve been talking for more than ten minutes and you haven’t called me ‘Excellence’ once.”

I startled. “I’m sorry.” It occurred to me that I should have said “Excellence” just then.

He was grinning. “Don’t be. Isn’t that what I just said? No one’s ever done that to me before. It’s very disrespectful. I like it." 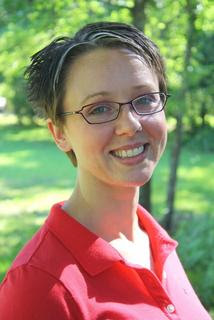 Leah Petersen lives in North Carolina. She does the day-job, wife, and mother thing, much like everyone else. She prides herself on being able to hold a book with her feet so she can knit while reading. She’s still working on knitting while writing.
FIGHTING GRAVITY is her first novel.
Twitter: http://twitter.com/LeahPetersen
Facebook: http://www.facebook.com/LeahPetersenAuthor
Goodreads: http://www.goodreads.com/leahpetersen
Google+: http://profiles.google.com/leahpetersen
Pinterest: http://pinterest.com/lpetersenauthor/

PRIZE INFORMATION
The author will be giving away a prize pack containing these items hand knit by the author: a hat, a replica of the symbol of an important institution referenced in Fighting Gravity to TWO randomly drawn commenters during the tour.

Thank you for hosting Leah today.

Sounds like an intriguing book. I will be looking for it.
debby236 at gmail dot com

I just want to welcome you to Beyond Romance. I love science fiction - I've got a M/M sci fi release of my own coming out in July. This one sounds like great fun - the interaction between the characters is very genuine.

Sounds like a great story ... good luck with it.

Thanks for having me and for the kind words, everyone. Good luck with your new book, Lisabet!