Don't Let Politics Get in the Way!

[This post is part of the blog tour for The Harder She Comes, an absolutely fantastic lesbian anthology edited by D.L. King. I loved the book - and Teresa's story was one of my favorites! ~ Lisabet] 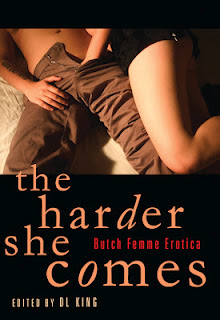 My contribution to The Harder She Comes, “Birthday Butch,” doesn’t attempt a deep examination of what it means to be butch or femme. It’s a sexy spanking story about a hook-up with potential for more, in which a toppy femme gives a special gift to a sweet, shy butch. But it’s a story I wouldn’t have even dared to fantasize about, let alone write and publish, when I was younger. And that makes it special to me.

When I was in college in the early 80s, the butch-femme dynamic seemed archaic to us very young feminists. Back then, most of us in the women’s studies department believed that butches and femmes were parroting the gender roles of the heteronormative patriarchy. Maybe butches and femmes made sense in the bar culture of the 40s and 50s, but we didn’t need that role-playing shit anymore and the dynamic would die a natural death with a new generation.

I’m sure I wasn’t the only one of those opinionated young women who secretly wondered whether there’d be good sex or even attractive outfits in this brave new egalitarian world. But we couldn’t let such shallow concerns get in the way of grand theories, could we?

Flash forward a few decades and I’ve found a career writing kinky erotica and a life doing kinky things. (And I married a man, which was the last thing I expected in 1983!) I can laugh at my naïve younger self and my equally inexperienced and earnest friends who could only see a way through one set of constraints on female sexual possibilities by creating another set.

I’m delighted to see that today’s young activists seem willing to embrace or at least consider human consensual sexuality in all its complexity and human gender in all its variants. I love seeing the blossoming of options, the opening up of self-definition and exploration on so many levels.

And among those options—relationship options, gender/self-image options, even as simple as fashion options—are those butch and femme archetypes, dressed up for the 21st century, thoroughly re-examined with new insights about gender theory, and sexier and more intriguing than ever.

Why does the butch-femme thing fascinate me, when it’s not part of my life except through my friends? Why did I jump on the chance to write something for this delicious anthology? That’s easy. People who actively think through what they want from sex and relationships, who own their sexuality, their gender, their self-presentation are insanely hot. So I have a definite weakness for the 21-century butch and femme, who’ve taken those old-school archetypes and made them their own and get sexy and maybe kinky in their own ways.

In closing, I leave you with this: Love whom you love, have great sex with the folks you fancy—and don’t let politics get in the way of your path to joy.

The rest of the tour!

Posted by Lisabet Sarai at 3:24 AM

Welcome to Beyond Romance, and thanks for contributing a great post.

The varieties of sexual inclination are almost infinite. One thing I love about THE HARDER SHE COMES is the way the book, in the totality of its different stories, demonstrates that fact. I loved your story, with its stereotype-demolishing characters, especially the butch.

Thank you so much for hosting me, and for the compliments on my story. That means a lot coming from you.

What you said, Teresa. But then, butch & femme identities (esp. among bio-females) have become so much more diverse than in The Well of Loneliness (1928), where they are binding & inescapable as straitjackets.

What a wonderful description of your evolution. I most certainly can relate.