I know I will be asked one question more than any other: Are you sexually attracted to dolphins? No.

And the inevitable follow-up: Do you think this book promotes zoophilia? The answer to that is a little more complicated. I did not write it with that intention, nor did I write it to shock and disgust. Rather, I wanted to analyze what constitutes a truly open mind, and whether having one is a form of self-sacrifice.

The adjective “open-minded” is often used in a positive light, and it’s true that open-mindedness has facilitated breakthroughs in every area from music to civil rights. But on a personal level, because the open mind must by definition remain objective, it must also lack passion. And a mind lacking in passion may imitate others’ passions.

Am I against striving for approval from others? Certainly not. After all, I sought publication for this book, which is a form of approval. But striving blindly, seeking self-knowledge outside the self? That, I am against.

Am I sexually attracted to dolphins? No. Would I be, even if I fell in with a crowd that considered it okay? No. If I want to expand my horizons, I’ll take up knitting.

How about you, dear reader? Do you know which aspects of you will never change? I hope The Aquarians will accompany you on the ever-shifting path to self-discovery.

The Aquarians by Gigi Brevard 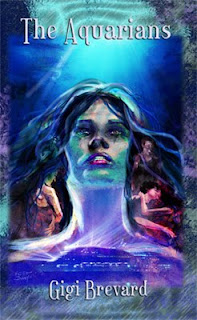 Natalie lives the sweet life as a dolphin trainer and performer aboard the Oasis, a large and opulent cruise ship. She is continually wined, dined, and laid by wealthy passengers in awe of her glamorous profession. But her life is turned upside-down by a team of visiting scientists, including the irresistible-yet-aloof Michael. Upon discovering that these “scientists” aren’t who they say they are, and their reasons for joining the Oasis are less than savory, Natalie faces a difficult decision: should she keep their secret as a last-ditch effort to conquer Michael and escape the shallowness into which she believes her job has trapped her, or rat them out in order to preserve the status quo?

Lauren and I had just finished our training session when Jeff returned with Blake Townsend and his team. I took Townsend to be the oldest and most authoritative of the three, who chatted with Jeff while the others trailed behind. He was pushing seventy. His arms had been burned to a deep mahogany, but his face was protected by the brim of a canvas hat more suited to a safari than a cruise ship. He wore a Hawaiian shirt and a bright band of zinc oxide across his nose. Lauren and I couldn’t decide who looked more ridiculous—Townsend himself, or poor Jeff who had worn a suit to greet him.

Once I was over humor of that scene, however, I couldn’t stop staring at the remaining two team members.

One was a blond in her twenties. Not the Beverly-Hills-type blond in her twenties that we see come and go so often aboard the Oasis, but a Midwestern-type blond with a genuine smile, elf-like ears that were just pointy enough to be cute, and feet that tap danced wherever they went. Unlike many young professionals, she didn’t seem concerned about appearing too childlike to be taken seriously.

The other was a guy. His age was difficult to place. The receding hairline said at least thirty-five; but he was punked out in fraying jeans and a black tee-shirt advertising some militantly vegan band, which indicated he must be more like thirteen at heart. Underneath the sleeves of that tee-shirt rippled muscles that were the size I dug. Not so big they could crush you with a casual embrace, but big enough that they could cradle me after sex and I would fall asleep safe and warm.

“Hi!” exclaimed the blond, tap-dancing over to Lauren and me. “I’m Sue. It’s so awesome to be here. This is the first time anyone’s ever paid me for my sciencey stuff… well, I don’t really get paid, but you know. Room and board. I’ll probably eat peanut butter crackers the whole time I’m here, but hey, I’m in the field. That’s what you do in the field. Am I right?”

“You tell me,” Lauren said.

She was unimpressed, but I thought this chick was cute, so I put out my hand for her to shake. “Hi, Sue. I’m Natalie. This is Lauren, my other supervisor. I see you’ve already met Jeff.”

“Oh, my God.” She dropped her voice and grabbed my hand in a way I had not meant for it to be grabbed. “Can you believe how studly he looks in that suit? I thought I was going to die. And to think we came in jeans! Except Blake. He is such a nut.”

Lauren pried an empty fish bucket out of the hand to which Sue wasn’t clinging. “I’ll just go clean this for you.”

Jeff, Dr. Townsend, and the thirteen-at-heart guy joined us as Lauren rushed off to clean buckets.

“Where’s she going?” Jeff demanded. His feathers had been ruffled by the suit thing, and he’d probably hoped that Lauren would take the scientists off his hands for a bit so he could go change.

“Play in fish blood,” I answered.

Sue howled and fell against me. “Play in fish blood. That’s a riot.”

I shook hands with Townsend, who gave my body a brief once-over before looking me in the eye.

I’m used to it. I practically live in a bikini.

The other guy introduced himself as Michael, and kept his gaze straight ahead. My crotch felt as if it were being dragged toward him on a fishing line. It drove me crazy that he was too polite to check me out. I both resented him and fell in love with him for it at the same time. “You know, I always wondered if the dolphins thought I was hot,” I said.

Blake laughed. “Well, no way we’ll ever know for sure. But we can gather some solid evidence.”

“I’m going to change out of this solid suit,” Jeff announced. Sue laughed again. “Nat, do you mind showing these guys the ropes?”

“Oh, you know… just point out which dolphin is which, and tell them a little about the facility and so forth. I’ve already been over all the bad guy stuff, like the no-touching rule. So feel free to take them around, have some fun.”

The no-touching rule always perplexes visiting researchers. They think if they’re allowed to touch our dolphins under supervision as part of the experiment, they should also be allowed to give free rubdowns at poolside on a lunch break. Trust me, they shouldn’t. We train our dolphins using a reward-based system. A rubdown is one of the rewards we use. So if Joe Researcher decides to give Twitch a rubdown because he thinks it’s cute when she steals the hat off his head, he’s rewarded her for that behavior; and weeks of training Twitch not to steal hats (for which she is notorious) will be negated. This confuses and frustrates both us and the animals.

“I’ll be back in a sec,” Jeff promised, and disappeared into the men’s locker room.

“Well, we’ve got two pools,” I began. “The one behind me is the show pool. It’s three stories deep, so over thirty feet. Both the restaurant below us and the club below them have a wall made of glass so people can view the dolphins. So even late at night, after we’ve had our last show, they still light this pool up all crazy.”

Michael cringed. “And that doesn’t bug the dolphins?”

“I dunno. You want to do a study on it?” I react crabbily to do-gooders who have no idea what they’re talking about. Of course dolphins in captivity face challenges that they wouldn’t in the wild. But the flip side is true as well. Of all people, I would have expected a behavioral scientist to understand that; and particularly to understand that without us, his study would be infeasible.

“Well, I’m sorry, but I don’t think keeping the lights on all night shows a great deal of respect for them. Especially colored lights that would look unnatural to them, anyway.”

“Let’s talk about something else,” suggested Blake. “Oh, who have we here?”

Bailey, Chicken, and Twitch were spy hopping at poolside, checking out the newcomers. I recited their names and rattled off the tricks we use to tell them apart; but the whole time I was thinking about Michael, what a dick he was, and how much I wanted to do him.

Bio: Gigi Brevard is the author of numerous short stories; including “I Love Vegetables,” which appeared in the UK publication Forum; “Kingdom of Sweets,” which appeared in the anthology ‘Twas a Dark and Delicious Christmas; and “New Girl, New Pearls,” which appeared in Hustler Fantasies. She was orphaned at a young age and raised by a passionate animal rights activist. At sixteen she dropped out of school to join her guardian in sustained protest against a whaling fleet, and tragically lost her right eye to a harpoon. During her recovery, she developed an intense fascination with the psychology of sexual attraction. Two years later she spearheaded the infamous Tea for Too Many, a weekly orgy party in an affluent East African region that led to the arrests of royals and dignitaries from around the world. She resides in a secret wing of the Ernest Hemingway house, where she collects classic boats and vintage diving equipment.

Welcome to Beyond Romance! The Aquarians sounds fascinating. I'm curious - did you do a lot of research about dolphin behavior and biology in preparation for the book. (In other words, can I believe what I read?)

Thanks for being my guest and good luck with the release.

Thanks for having me :) Yes, my alter ego has her bachelor's degree in psychology with a concentration in animal behavior, and has worked at two facilities similar to the one in The Aquarians. All the "day-in-the-life" stuff is accurate. You will also read about some philosophical questions regarding dolphins in captivity that real trainers and researchers wrestle with every day.