I can’t do it. I just can’t. I cannot sit down, write an outline, plot where my story will go, and then sit down and write it. I just can’t do it. That’s the perfect recipe for writer’s block for me. All I know, and all I need to know is where to start, where they’re going (cause it’s never about me – the inmates in my head definitely run the asylum), and where it will all end. That’s as much detail as I need.

I think everyone has heard tales about how a story just grabs an author and won’t let go until they’re done writing it. I must admit, that’s how it happens sometimes. The story just rolls around in my head and keeps growing until I write it down.

But then there are times when the story just hovers, as if waiting for something to happen. That usually means I don’t know my characters well enough to know what they’ll do next. What do I mean by that? Well, it might come as a surprise to you, but when you read the blurb about one of my stories, you very possibly know more than I did when I started to write it. I’ve been known to laugh out loud or cry when my characters reveal something that I had no idea was coming.

Take, for example, this story that I have coming out on October 1st, Wolf! This is what I knew when I started writing:

Lyssa Merrick has no intention of ever being involved with a wolf, but when Wolfe Reardon seeks her wildlife services she realizes choosing a mate is not always a conscious decision.

You see, Lyssa is a lynx, but she grew up in a pack of wolves and well, after certain things happened to her she swore that she would never be a part of pack life again. Wolfe on the other hand is pretty darn sure of himself (typical alpha). The chase is definitely on from the first time they meet. Here’s a sneak peek. 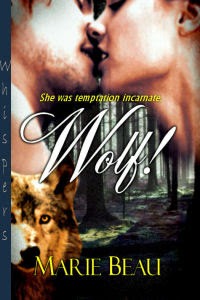 She was temptation incarnate. Wolfe wanted to let his fingers linger in her short, white-blonde hair. Her pixie face and bright hazel eyes were enough to bring any hot-blooded man back for a second look…or more. The intelligence behind the eyes, the self-contained responses made him want to dig deeper, get to know her—on every level. It was all he could do not to lift her over the counter and take advantage of the smell of arousal emanating from her body. But her look was anything but inviting. His fingers clutched the hand he was holding a little tighter, well aware of her resistance. Her sigh was his undoing. He reached behind her neck, his fingers luxuriating in the soft fur at her nape. He needed to taste her lips and take just a lick of her neck, maybe a nibble, mark her as his.

Wolfe leaned forward, tugging gently for her to meet him partway, and suddenly he was holding…air.

Silver-white fur glimmered and he caught a glimpse of her twitching whiskers and pointed ears as she swiveled and raced to the back. Her transformation was beautiful. A lynx. A soft, furry, intoxicating cat.

A smile spread across his face as he shifted and took chase, his nails clicking on the hardwood floor while her padded paws were silent. His size was no advantage in these close quarters.

He slid toward the doorway, his paws backpedaling, trying to slow his momentum. He crashed into a chair in the corner before tangling in the curtain in the doorway. Picking himself up, he gathered speed and skittered into the back room just in time to see her short tail disappear through the pet door.

Pouncing forward once again, his nails scraped on the floor as he skidded to a stop. He tilted his head to study the kitty door. He would never fit. It was a larger size than normal, but definitely not big enough for a full-size wolf. He sniffed at the opening and poked his nose through, wary of getting swiped at by her claws.

Writing is a journey that I very much enjoy and although this is my first published piece there will be plenty more to come (including a sequel to this one). I hope you’ll join me in my travels and let me introduce you to some real characters I’ve met.

For more about Lyssa and Wolfe, visit me at:

Yup, I'm the same. I NEVER write an outline of a story before hand. I have a plot in mind but usually it changes on a hairpin.Loved the snippet. I rather like wolves, hense my own dog, who thinks he is one!!!

I have never used an outline either. I have a general idea of how I want the story to go, but like Margaret, the plot can change if something more exciting comes to mind. Love the wolf!

Loved the post! Never use an outline. My characters take on a life of their own!

I love to outline, my problem is just doing it, sitting down and working on my own writing instead of someone elses.

Oh my, we're all pantsters. I envy anyone that can write and follow their own outline. But like most here, I just can't do it. I have a general idea, start writing, and see where it goes. Hmm. I do seem to write myself into a corner at times. I'm also a "layerer"--like that word? Meaning, I write the basics of a chapter, then keep going back and layering. Maybe that's why it takes me forever to write a story. lol.
It's so nice and comforting to know I'm not alone.
Great post, the novel sounds yummy. Good luck with it.

Enjoyed your post, Marie ---so GLAD to hear there are more "pantsers" out there like me! And a really great excerpt! Cant wait to read this one!

Best of luck on your first novel ---and all those to come!

LOL well, nice to know, I'm not alone! Thanks everyone!

Okay, I'll admit to outlining, or at least doing a scene list/chapter framework before I begin anything longer than about 10K. However, my characters don't always agree with my ideas, and that's great -- it means that they're alive! But I am very linear in my writing. I start at the beginning and write to the end, with very little looping back. I can't imagine how some authors do it, writing a scene here and one there and then assembling them.

LOL, there's nothing wrong with outlining, I just can't do it. Kills my story every time. But I'm with you on linear writing too. I go back and add a little here and there, once in a while I'll realize a whole scene is needed, but for the most part it's forward all the time.

Thanks for the comments!