It’s the battle we all know so well and it is something that authors and script writers alike use to make their works interesting and exciting. It is the ultimate conflict and everyone knows a story needs some problem to fix to make it fun to read.

Now, Victoria Blisse stories aren’t usually big on the whole bad guy/good guy thing. Conflict is often internal in my stories or between lovers or it can even be with societal standards but I don’t often have a villain of the piece. So when I wrote Moon Shy I thoroughly enjoyed creating someone who was pure evil.

When the idea for Moon Shy came to me I only had one character in mind. A quiet, reclusive werewolf who hates what he is. That is how Lowell was born. I also knew, as I was writing romance that there would be a love interest and early on in proceedings I decided on a human girl who had known Lowell before he became a werewolf and so Jenny was created.

And you’d think that the whole werewolf falling in love with a human thing would create enough conflict but no, I felt something was missing. I needed something more. I needed an outside force that would pull my two lovers apart. So then came Desdemona. She didn’t have a name for a long while. In fact I asked my friends to help me come up with something suitable for a cold hearted killer. Desdemona was the name I loved the most.

She is evil and she is a werewolf. She loves that, revels in that and when she is in human form she thinks like a werewolf and longs to be a werewolf again. She is the complete and utter opposite of Lowell and so the story gained balance, good Lowell, evil Desdemona. The great thing is though that for more than half of the book Lowell hasn’t got one clue that Desdemona is a werewolf and the way he finds out is pretty dramatic.

Writing a villain is fantastic fun that you can really sink your teeth into, pun intended. It really got my creative juices flowing. Good guys are always lovely to write but there is just something extra exciting about creating a character that is so wicked you want to slap them.

Now here’s a little snippet of Desdemona evil for you to enjoy:

“Coming in to work the day after a rampage was never fun, but Dessie was determined to make the most of it. The night before, she had been tearing flesh apart with her teeth and claws, and she would do the same today—but metaphorically, as bosses frowned on all that blood and mess.

She had checked all of the information for Demonet and found their most loyal and hardworking employee, and that was why she had sat at Lowell Kenyon’s desk first thing Friday morning. It was easy to run out the weak and the useless, but the fun was to be had in making a secure worker insecure. It amazed her how many top-of-the-class employees would fall apart under just a little Desdemona pressure. It was one of her favourite things about the job.

Lowell’s office in the bowels of the building was somehow comforting. Dessie’s sensitive nose picked up on a scent that indicated the presence of a wolf, but it could have been decades ago, the scent was so weak. It excited her all the same, her brain still mostly werewolf. It always took some time to truly get back to normal after a change, especially if she’d killed many the night before. And last night she had been very successful, indeed.

It wasn’t until he’d cannoned into his office ten minutes late that she realised why the room smelt as it did. He was a werewolf. Every pore exuded the scent, and as he came in the room, it was flooded with instant werewolf Viagra.

Dessie really enjoyed playing with him. She saw his hackles rise, but he seemed weak. She couldn’t sense a kill on him at all. Maybe he was a new wolf that she’d be able to break in.

She left him reluctantly, but she had a job to do. Seducing a brand new werewolf would have to take its place. The one thing missing from her perfect life was a partner in crime. It was all right bonking victims before she ripped them to shreds, but what she really wanted was a werewolf to have real, violent, doggie style sex with. Someone who could share the exhilaration of the kill with her. Lowell would be perfect. He needed training, obviously, and she was the woman to do it. “ 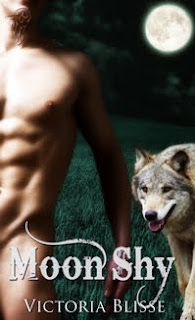 You can read the whole story from Monday the 27th of September. Just pick up a copy of Moon Shy from Total-E-Bound.

Now out of curiosity who is your favourite villain? The one character you really love to hate? My mind flicked instantly to childhood and one of my favourite books as a kid was The BFG. So my favourite evil enemy would have to be the giants. I always loved the bit where Sophie hid in the snozzcumber! Let me know your favourites, I bet you’ll come up with some juicy ones.

Thanks for having me, Lisabet.

BIO: Victoria Blisse is a mother, wife, Christian, Manchester United fan and erotica writer. She is equally at home behind a laptop or a cooker and she loves to create stories, poems, cakes and biscuits that make people happy. She was born near Manchester, England and her northern English quirkiness shows through in all of her stories. Passion, love and laughter fill her works, just as they fill her busy life.

Glad to have you back at Beyond Romance. Desdemona sounds very evil indeed!

I don't write a lot of villains either, but my M/M novel NECESSARY MADNESS has a doozy. Every review I've gotten for the book has talked about how compelling he is. One reviewer begged me to write a sequel about HIM - not the heroes!

Sounds like a great read. Good luck with the book.

She sounds like a great villain. I can think of a favorite t.v. villain--Spike from Buffy the Vampire Slayer. I liked how he was really evil and then once he got that chip in his head it changed him. Kind of like being neutered.

I was just listening recently to the soundtrack from the Buffy "musical" episode, Once More with Feeling. I _love_ Spike's song:

You know you've got a willing slave
But you just like to play the thought
That you might misbehave
Until you do I'm telling you
Stop visiting my grave...

I'm not sure he's really a villain. He's more the tragic hero. But I DO love him!

Lisabet -thanks for having me! I'm sorry I've not commented earlier, I was away all weekend celebrating my 10th wedding anniversary.

And Moon Shy is available to buy now, so pick yourself up a copy and enjoy the classic good and evil struggle with extra sexy bits!