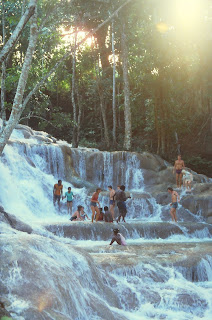 Last week I was a guest at Shelley Munro's blog, "A Taste of Kiwi". Since she's as much of a travel fanatic as I am, I decided to talk about Jamaica, which provides the setting for Fire in the Blood. In case you missed that post, I decided to repeat it here.

As I've shared in other blog posts, my husband seduced me in a Burmese restaurant with tales of his own international adventures. Jamaica was the first foreign destination we visited together. This was almost thirty years ago and I haven't had the chance to go back, so readers should recognize that my impressions are a bit dated. Nevertheless, I suspect (from my research and reading) that the country has not changed that much, especially not physically.

We got a cheap deal on a package―round-trip airfare and a week's hotel in Montego Bay. Actually, the resort where we were booked was a good ten miles outside the city. It had a lovely beach but was quite isolated from Jamaican culture. Fortunately, the tour was cheap enough that we felt comfortable using the hotel as a base of operations and making overnight excursions to locations elsewhere on the island. We also took in some tourist activities around Montego Bay. I recall a trail ride into the mountains above Montego Bay (brilliant blue sky, blazing sun, the smells of horse and growing things). I vividly remember a night-time swamp cruise that concluded with a party on an island―reggae music, dancing and lots of Red Stripe beer!

We took a bus eastward to Ocho Rios, famous for its waterfall. That side trip also included a tour of an old plantation, buried in the forest. I remember the sense of the past hovering over those quiet ruins. The country has a bloody history. Britain, Spain and occasionally France all had commercial interests in the island, with its rich soil and strategic location. Slaves labored to produce sugar, coffee and other valuable commodities. Frequent revolts led to draconian responses from the Jamaicans' colonial masters. Fugitive slaves called Maroons waged guerrilla warfare from the inaccessible, jungle-clad heights.

Later in the week, we traveled to Negril, the westernmost point on the island, where sheer cliffs of lava rock plunge into the turquoise sea. These days Negril has been developed into a major tourist destination, with five star resorts and so on. At that time, it was quite remote, with a couple of thatched roof bars looking out over the ocean and a few simple cottages. After more than thirty years of travel, to every continent except Australia, I still recall the scenery and atmosphere at Negril as extraordinary.

In addition to our sightseeing, we also met some local people: an American woman (whom I'll call Jill) who was making her living as a performer (dancing with a live boa constrictor!), her Jamaican boyfriend and their social circle. We had the chance to hang out with Jill and her guy in their simple two room house made of concrete blocks, near the railroad tracks in Montego Bay. They didn't have much, but their whole attitude was laid back. There was always music playing. There was always the scent of ganja in the air. No one seemed to worry about the future. “No problem, man,” was the response to every concern.

I started writing Fire in the Blood in response to a call for Halloween vampire stories. I wanted to create something really different. Almost all my stories are set in specific locales―atmosphere plays a big role in setting the scene for me. I thought back to our long ago trip, the sparkling sun of Jamaica and its dark history, and decided that a Jamaican vampire might be just the thing. When the publisher read the resulting tale, they asked me to expand it into a stand-alone book, which will be released on August 16th. The book is all fiction, of course, but it incorporates snippets of my own experience: a trail ride into the mountains, a ruined plantation, a naked midnight swim in the volcanic grottoes of Negril. I like to believe these contributions make the book more vivid. I hope that my readers will agree.

Here's the blurb. You can read an excerpt at http://www.lisabetsarai.com/fireinthebloodex.html .

Fire in the Blood

Maddy and Troy hope that a carefree vacation in tropical Jamaica will re-ignite the passion in their five year relationship. On a scenic mountain trail ride, Maddy's horse bolts and carries her deep into the jungle. Injured and lost, she is saved by a seductive giant of a man whose mere presence kindles unbearable lust. By the time she understands his dark nature, it is far too late for her to escape.

Bitter and alone, Etienne de Rémorcy haunts the forest around the ruined plantation of Fin d'Espoir. He has sworn to never again taste taste human blood, but when slender, raven-haired Madeleine begs him to take her, he cannot resist.

Troy is hugely relieved when Maddy makes her way back to their hotel after her ordeal in the mountains. But he finds her greatly changed―fiercely passionate in bed, restless and disturbed at other times. The tall, elegant stranger he meets on the beach holds the key to her transformation―and soon has seduced Troy as well. Even Etienne's most potent magic can't extinguish the fire in Troy's and Madeleine's blood.

I love your books and I know this one is going to be awesome!

That pic alone makes me want to go there soo bad! I'll have to keep your experience in mind when I do decide to go:)

I've always dreamed of going to Jamaica and your post has reinforced that desire. Maybe one day I'll go. Gotta save up first!:o) Jamaica seems like the perfect place for Fire in the Blood. Love the blurb and it sounds like it is going to be a great read.

Your trip to Jamaica and that is do great you used it for your book.