The Dawn of Women's Rights?

Will Dunwick should not find the wealthy widow Bergeron comely, especially because he is charged by his sovereign, King John, to take her to her bridegroom, a callow boy with a spine of mush. Yet, tempering John’s irrational urges is Will’s foremost goal.

I do hope you will come read about one of the motivations of the nobles in John’s realm to press for a bill of rights. Yes, the Magna Carta contains a section devoted entirely to the limitation of the king’s right to abuse widows.

Here is a nibble of my newest cherry, For Her Honour, out now at www.total-e-bound.com. 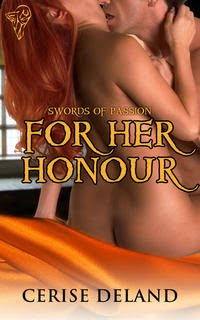 “Listen to me, Blanche.” Will used her given name against protocol but he knew he had to nip her desire to be free and do so dramatically. She sucked in air at his familiarity as their gazes met and mingled. “John has problems with the Welsh. You know this so well. Your lands sit nearly on those borders. His alliance with the Prince of Wales is not so strong, despite the fact that Llewellyn is married to John’s daughter, Joan. John cannot look lightly on anyone in these climes who shows an independent streak.”

“I cannot pay his new tax from last year. It would empty my coffers!”

Will nodded, knowing this had been the burr that pricked John’s skin. “Your refusal to pay the assize on your beer was the impetus to this marriage. I see you have the means to entertain well. Know this though, if you had been more frugal and paid the tax, I would not be sitting here, dining and drinking, then carting you off to a wedding you do not want.”

She stiffened and tried to retreat.

He jerked her closer. The aroma of soap and some fragrant herb drifted to his nostrils. Had she bathed before she came to supper? Should he be so honoured? Should he be fool enough to care? Unbidden, his cock stirred to life. “You have not paid to your lord and master the tax that allows him to pay for border guards."

“They are too exorbitant!”

“High or nay, the price is not yours to determine,” he corrected her.

“Llewellyn’s men harry my serfs on the western borders, tax or not from John."

“You should have paid the tax. ‘Tis best, you see, when a ruler is high tempered, to pick your battles carefully. You had the money for the tax.”

“I did not! Not then! We had a flood and I had to pay for men from Berwick to help us rebuild a dam before the rains.”

This was the first time he had heard this. The explanation endeared him to her more—to no avail. “I wish you had sent us word of that. I might have been able to help. But now all you have is no stomach for a wedding that is the punishment for your failure to pay.”

She yanked away her arm. Tears glistened in her lashes.

Christ in a cesspool. “Do you not see the wisdom and the logic behind the marriage?” he seethed, marvelling that he refrained from shouting at her. “Hugh de Morency has men at arms. Men whom John will post here.”

“Aye. For your protection!”

Fast as an arrow from a bow, she rose from her chair. Her chair clattered back and forth on its legs.

At their mistress’s show of ire, the assembly hushed and stared.

“Come with me,” Blanche ordered him. “We will talk in private.” She swished her skirts to one side and proceeded to the side of the hall and the stairs to the upper keep. His own rooms were in the opposite tower, so this invitation to her bower was intimate. Risqué. Appealing. He forced back raw desire

Then ground his teeth. And necessary.

Is this the start of womens’ rights? Of course!

Come visit me for more at http://cerisedeland.blogspot.com

Email ThisBlogThis!Share to TwitterShare to FacebookShare to Pinterest
Labels: Cerise DeLand, For Her Honour

Thanks for being my guest today. Blanche sounds like the kind of heroine I love-- one who won't let herself be pushed around!

Congratulations on the release.

I do love my history, especially when it is wrapped up so nicely.

Lisabet, Thank you so much for having me today!
I find this period in English history terribly exciting. John's mother, Eleanor of Aquitaine was a strong woman herself. Yet, perhaps not quite as strong as her second husband, Henry II. That wily man conquered all, it seems, and yet did not pass on his extraordinary abilities (nor intelligence) to his sons, Richard and the youngest, John. Yes, there were 2 other sons and one daughter of Henry and Eleanor, but none equalled his power.
Hope you enjoy my version of John. And his portrayal here in FOR HER HONOUR!

The fact that the hero is explaining all this to her is refreshing. He obviously believes she can understand -- not so common for a man in those days. Most believed women had no "head for business or taxes" and couldn't grasp what they discussed. So that's a refreshing change. The beginnings of the Magna Carta! Wonderful. That document was so radical that it changed the entire world. Kudos for writing about that time period. Sounds like a good read.

Love your book cover. I really enjoyed your excerpt.
Sue B