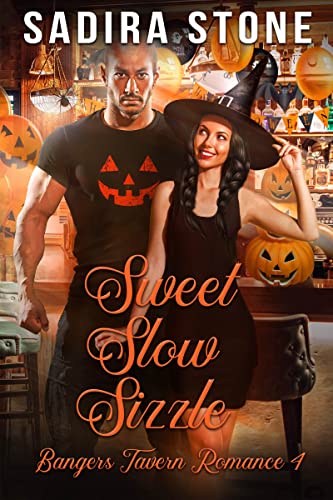 Lana Lopez makes a decent living waitressing at Bangers Tavern, thanks to the popularity of the quirky local hangout. Good thing, because she’s trying to support herself and her two teenage brothers. The car crash that killed both their parents when she was only twenty-two has left her little choice, unless she’s willing to relinquish what’s left of her family to the care of her predatory aunts. She has no time or energy for anything beyond survival. In particular, she can’t afford to be distracted by the attentions of Bangers’ sweet, hunky bouncer Jojo Williams.

Jojo has had his eye on Lana for more than three years. His heart aches for the fierce, proud young woman, but he understands that she needs space. When her brothers get into trouble, though – as teenage boys will – he offers to help. Despite her concerns, Lana recognizes that Leo and Pedro need a male role model, and with his gentle strength and good sense, Jojo is the ideal candidate.

Gradually, the half-Hawaiian giant’s consideration and patience – not to mention his awesome muscles – wear down Lana’s resistance. Yielding to the power of their mutual attraction, she’s almost ready to believe she can handle a relationship while still keeping her family together. It seems happiness is within her reach, until a conjunction of crises causes her to curse her selfishness and push Jojo away, regardless of how much that hurts.

Slow Sweet Sizzle is the fifth Bangers Tavern Romance I’ve read. (The official series includes only four so far, but I also read the free novella Cupid’s Silver Spark.) I’ve become accustomed to the series formula: meet up at Bangers, mutual attraction despite apparent differences, life circumstances that stand in the way of the relationship, resolution and happily-ever-after with considerable help from friends and family, especially the cast of distinctive individuals from the tavern – plus lots of cultural variety and heaps of savory food.

Fortunately, Sadira Stone makes this formula work. Her characters have enough quirks to keep them interesting, while their differing ethnic backgrounds mirror the diversity of urban society. Although there’s no real suspense – you know there’s a happy ending in store - you can’t help but enjoy the journey. The antics of the Bangers crew add a lot to the mix. It seems they’re always celebrating something. In this book, it’s Halloween. Now there’s a party I’d love to attend!

Sweet Slow Sizzle is an appropriate title for this novel. It takes a long time for Jojo and Lana to consummate their relationship, but when they do, their connection is incendiary. Sadira Stone writes gorgeous love scenes that are simultaneously physically arousing and emotionally moving. She does a wonderful job capturing the special intensity of sex with someone you truly love.

I hope this isn’t too much of a spoiler but I have to mention how much I appreciated the treatment of Lana’s virginity. It’s utterly believable, not fetishized as is so common in the romance genre. Lana’s no innocent. She has had sexual interactions over the years, but she has never, as she puts it, “crossed the finish line”, because she’s never been with a man whom she really trusts. Popular culture treats sex so casually that this might seem almost deviant, but in fact I think there are plenty of women in Lana’s position, women who despite societal pressure choose to wait. (Lana’s embarrassment over this issue is a reflection of this pressure.)

My one minor criticism involves the one-sidedness of the villains, the tías who want custody of Pedro and Leo. They’re painted as conniving, selfish and domineering. At the same time, their motivations are never really clear. There’s some suggestion that they’re seeking financial gain, but nobody would realistically take on the care of a child in order to get the social benefits. We don’t know whether the aunts are maternal or paternal, but either way, one would expect them to show at least some sympathetic traits. They are, after all, members of the family.

Balanced against this is the delightful ambiance of Bangers Tavern: creative fun, irreverent humor, and a total disregard for calories. In the earlier books of the series, neighborhood yuppification threatened the tavern’s existence. I’m pleased to report that it is still going strong.

Thanks so much for reading and sharing Jojo & Lana's love story, Lisabet!