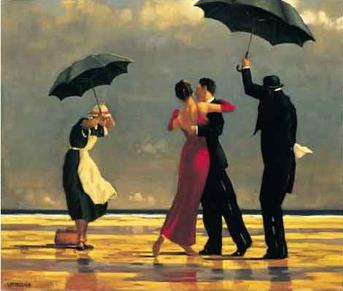 I’m sure you’ve seen the image above. Certainly I had, but until a few days ago I didn’t really know anything about Jack Vettriano, the artist who created it. I’ve always liked the painting, though. Beneath its light-hearted quirkiness, one senses an enigma. Who are the couple dancing? Why are they on the beach? What do the maid and the “butler” of the title think about their frivolous employers? Are they jealous? Resentful? Or is this just another day in the life of a servant? The painting clearly has a story behind it – possibly several.

Vettriano is my contemporary. He was only a child during the fifties, but most of the scenes he paints seem to be set just post-WWII. They brim with a sort of bitter nostalgia. The women wear permed hair, dirndl skirts, ball gowns, high heels; the men sport wide lapels and fedoras. The details are meticulously rendered. And every painting seems to have a story behind it.

In “After the Thrill is Gone”, a glamorous woman in a strapless gown and heels sprawls on a couch, exhausted or perhaps in despair, a cigarette smoldering in her graceful fingers. Has she returned home from one party too many, drained by the superficiality of her life in the fast lane? Has she just dismissed her lover, bored by his attentions? Or is she the one who has been rejected?

“Altar of Memory” is disturbing, almost perverse. An older man in a suit embraces a shapely, headless mannequin wearing a powder-blue gown. Was this his wife’s dress? His mistress’s? Did the absent woman die, or simply leave him for someone else? There’s a champagne flute on the table, a mirror on the wall. Whoever she was, one can almost imagine him stripping off the dress to make love to her mute simulacrum.

“Beautiful Losers” presents us with what has to be a ménage a trois. On the right a man in a vest and shirt sleeves embraces a slender blonde, burying his face in her nape while he pulls her against his body. On the left, another man watches them, attentive despite his smoking butt and casually dangling leg. Is he waiting his turn? Judging? Giving instructions? And what about the woman? Is she the seated man’s wife, loaned to his friend? I could see that. Or perhaps she has been hired for their joint pleasure. Her arms are crossed over her breasts, perhaps in a gesture of self-protection, but possibly to make it easier for her to slip the straps of her gown off her shoulders.

“Couple X” are clearly in the throes of lust. But who are they when they’re not lost in the intoxication of each other’s bodies?

“At Last My Lovely” is even more enigmatic. The beautiful blonde strokes her lover’s cheek while his hand rests upon her bare knee. Meanwhile, her shadow looms over them, dripping with menace.

Indeed, one of the reasons I found his images so thrilling was that they triggered all sorts of story ideas. I thought I’d finish this post by sharing a 200 word piece of flash fiction I just wrote in response to his 2006 creation “A Very Married Woman”.

“Same time next Wednesday?” As she fixes her hair and make-up, she doesn’t bother to look at him. She’s gotten what she came for.

“Sure.” That’s what he says, not what he thinks. She’s drained him twice in the past hour, once with her mouth, once with her wicked cunt, but it’s not enough, not nearly. Stay, he wants to tell her. Let me devour you. Let me hold you. She’d just laugh.

Nothing outside this room matters anymore. This is the only place he’s alive. Things that used to thrill him – the deals, the chase, the triumphant days and the glittering nights – mean nothing. Once a week, for an hour or two, his monochrome world turns Technicolor. Then gray shadows close in again.

How did this happen? When did simple, healthy lust morph into obsession? When they’re apart, he dreams of her sleek thighs. He wakes with her perfume in his nostrils.

“I think Fred’s getting suspicious.” A teasing smile on her ripe, bruised lips. “Maybe we should stop.”

“No!” He leaps to his feet and encircles her with desperate arms. “Forget about him!”

Her quick kiss shatters him.

Intriguing pictures. You're right--they all suggest stories that you have to guess at. I love your flash fiction too! I guess evocative is a better name for the pictures. And like you, I feel sex deserves a whole lot more respect! It's not dirty--it's essential.